Microsoft Releases New and Improved Bing App for iPhone [u] 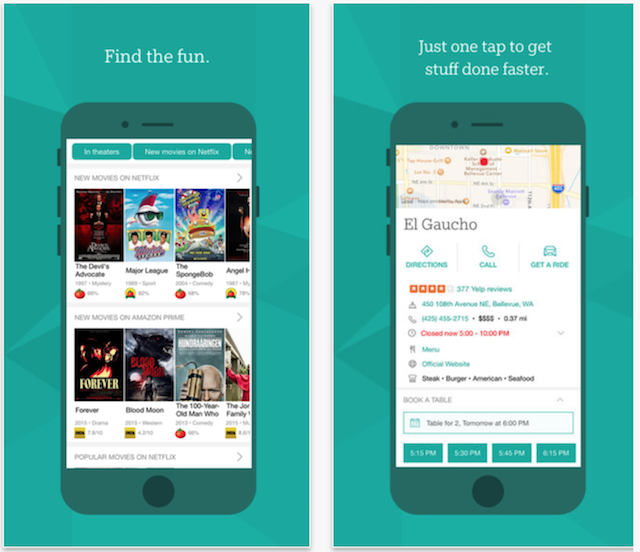 Microsoft has today announced the launch of a completely revamped and much improved Bing app for iPhone, which is now live as a free download in the App Store. The app promises to help users “find” and “do” faster and easier than ever before, by “bringing together the information you need and connecting to the apps you trust”. Microsoft says the new Bing app is focused on getting you an answer to your question as quick as possible (via Engadget).

Ryan Gavin, Microsoft’s GM of search, says that when he thinks how about mobile search differs from the desktop, the traditional list of search results that can get you eventually to an answer to a query aren’t useful. “I just want an answer,” Gavin says, “and I want to take that answer into an action, typically with some sense of urgency.” To that end, Bing for iPhone puts the data from Microsoft’s Knowledge and Action Graph right up front, alongside deep links right into the apps on your phone that’ll let you complete the desired action using the tools you’re used to.

The revamped Bing app features a completely redesigned homepage, offering you one tap access to restaurants, movies, images, videos, and maps, plus deals and attractions near you. The most interesting new feature is that you get answers to your searches right away, instead of having to click on web links to view them. All the relevant info from familiar sources, and links to apps to help you get stuff done faster is shown at the top.

The app now also works offline, allowing you to go back to your bookmarks and search history even when you don’t have internet connectivity. Your bookmarks, search history, Bing Rewards credits can now all be accessed via the app’s menu.

UPDATE: Looks like this is for the U.S. App Store only for now. To grab the latest update, hit up the following App Store link with your U.S. iTunes Account:

Streaming service FuboTV announced on Wednesday it has launched three Disney channels within its Premium package. Available now are the Disney Channel, Disney Junior and Disney XD. According to FuboTV, these new Disney channels are part of the company’s partnership with STACKTV, which began last year and added Global, HGTV Canada, Food Network Canada, W Network, […]
Gary Ng
6 hours ago