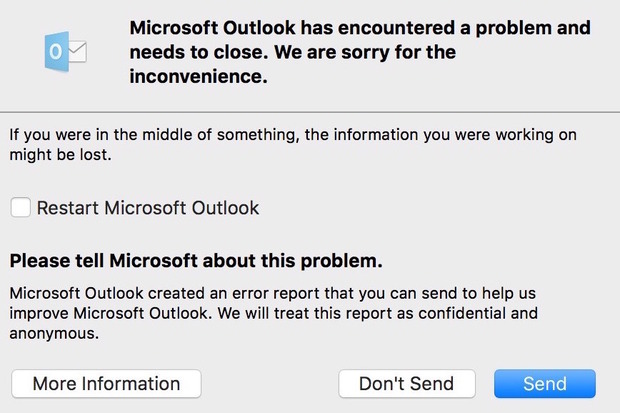 Microsoft has admitted that its Office for Mac 2016 suite is encountering frequent crashes on OS X El Capitan, while announcing that it is working closely with Apple to resolve the issue, though no ETA has been given for a fix, ComputerWorld is reporting. According to a Microsoft spokeswoman, the company is looking into the problem, and is actively investigating the matter. “Until there is a fix, we recommend people install the latest updates to Office 2016 for Mac using Microsoft AutoUpdate,” she said.

“We are working on a fix for 2011, and for 2016, we are working closely with Apple to resolve this issue as soon as possible,” Jeelani wrote. “Unfortunately, we do not have any timelines for either fix, please stay tuned and thank you for your understanding.”

It remains unclear whether the crashes are caused by Microsoft’s or Apple’s code, but since Microsoft’s statement and Jeelani’s message have both mentioned that the company is working or investigating with Apple, one interpretation is that Microsoft believes the problem originates with Apple. Or it may be that Microsoft simply needs more information from Apple to understand why Office applications are crashing.

Are you using the Office for Mac 2016 suite on El Capitan?