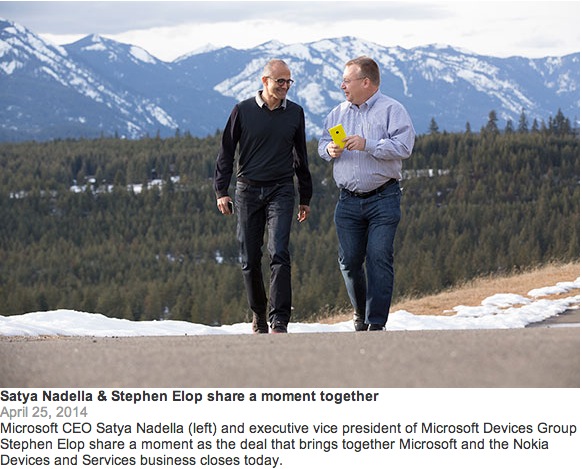 Microsoft has announced today it will cut up to 18,000 jobs by next year, or 14 percent of its workforce. CEO Satya Nadella issued a press release this morning with the following, which notes 12,500 jobs will be cut first from the newly acquired Nokia division back in April–roughly 50 percent of those workers:

The first step to building the right organization for our ambitions is to realign our workforce. With this in mind, we will begin to reduce the size of our overall workforce by up to 18,000 jobs in the next year. Of that total, our work toward synergies and strategic alignment on Nokia Devices and Services is expected to account for about 12,500 jobs, comprising both professional and factory workers. We are moving now to start reducing the first 13,000 positions, and the vast majority of employees whose jobs will be eliminated will be notified over the next six months. It’s important to note that while we are eliminating roles in some areas, we are adding roles in certain other strategic areas. My promise to you is that we will go through this process in the most thoughtful and transparent way possible. We will offer severance to all employees impacted by these changes, as well as job transition help in many locations, and everyone can expect to be treated with the respect they deserve for their contributions to this company.

Nadella says “The overall result of these changes will be more productive, impactful teams across Microsoft.” In other words, a more leaner, nimble company to compete with the likes of Apple and Google.

You have to feel bad for all workers losing their jobs, in particular those longtime Nokia employees, who have witnessed the downfall of their iconic Finnish company.