Microsoft Surface, the company’s flagship tablet that was launched a couple of months back with a high-end pro version scheduled for December release, is reportedly struggling to compete with similarly priced Google tablets in the market, generating merely 0.13% of all tablet web traffic, notes Chitika. 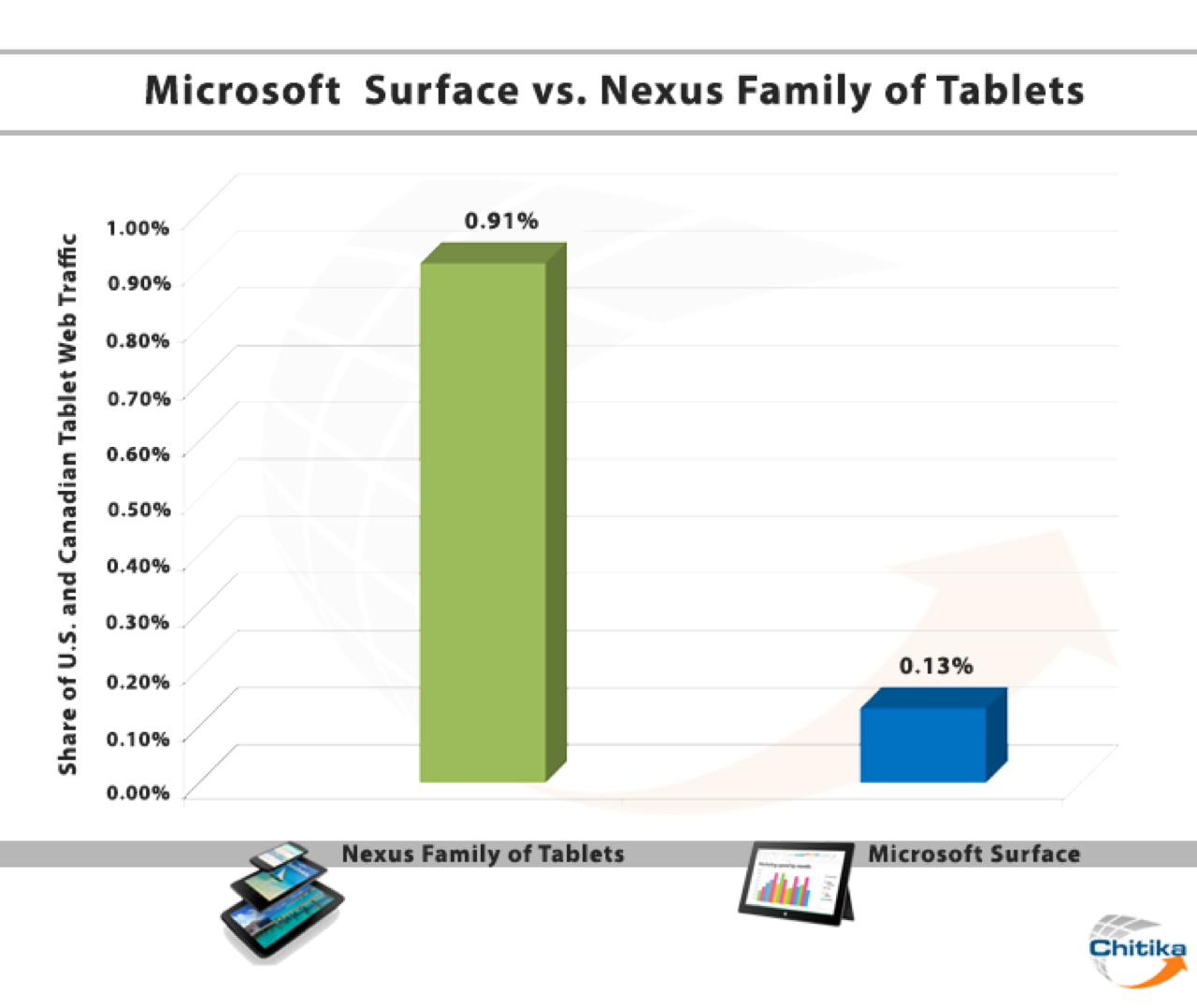 Microsoft released its Surface tablet on October 26th, while Google released a similar priced Nexus 10 on November 13th as a larger sibling of Nexus 7 tablet. While both Microsoft and Google tablets come in a $499, 32GB version, the Nexus 10 has a 16GB version for $100 less while the Surface can only be upgraded to 64GB. According to a recent study by Chitika Insights, the Surface only has 0.13% share of overall tablet web traffic, while the Nexus family of tablets has a 0.91% share.

Chitika Insights conducted a study to see which tech giant’s tablet offering is emerging as the most popular. To quantify this study, Chitika Insights looked at a sample of tens of millions of tablet impressions from the Chitika ad network, specifically from the U.S. and Canada, from November 12th to November 18th 2012.

Domestically, Google Nexus tablet users are generating more than seven times the Web traffic of the Microsoft Surface, but it is important to note that the original Nexus 7 had a head start, debuting this past July. With time, it would seem likely that this gap will narrow as Surface sales grow.

Looks like Microsoft seriously needs to figure out how to attract substantial levels of developer interest for its tablet and broaden its app ecosystem.

Market intelligence platform CB Insights recently compiled information on all of Apple's acquisitions, investments, and partnerships since the start of 2018 to try and glean the company's current areas of interest (via Apple 3.0). The data not only makes for an interesting infographic but also gives us a glimpse into Apple's plans for the future....
Nehal Malik
16 mins ago

In this week's edition of his Power On newsletter, Bloomberg‘s Mark Gurman detailed what we should expect from Apple's upcoming September event. Apple is expected to unveil the iPhone 14 and more at an event in the first half of next month. On the hardware side, Gurman expects to see the iPhone 14 series, the iPhone 14...
Nehal Malik
56 mins ago