Microsoft Wants You to Give Windows Phone a Chance

Microsoft is three years behind the competition and is trying to erase consumers bad memories of previous devices. A few weeks back they built a giant Windows Phone in New York’s Herald Square, and earlier this week they launched a cheeky HTML5 based mobile site that invites Android and iPhone users to sample its Windows Phone OS. 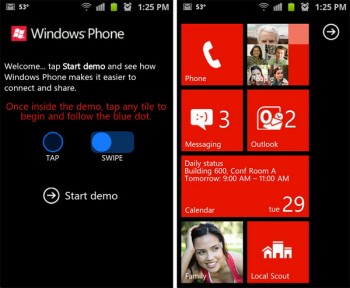 By visiting http://aka.ms/wpdemo you will be tunneled into a web based emulation of Windows Phone. The demo, which works surprisingly well, allows you to tap and swipe your way through some Windows Phone apps, such as messaging and e-mail.

Interaction is limited to pre-programed demos and you don’t get the full experience of Live Titles, for instance. Still, I think this is a great idea from Microsoft. Especially as a way to convince people that 7 isn’t 6.5. Will it convince me to drop my iPhone for a Microsoft device? — No.

What do you think of the Windows Phone demo?

Thanks to Wittgensteinian Alex C. for the pointer.