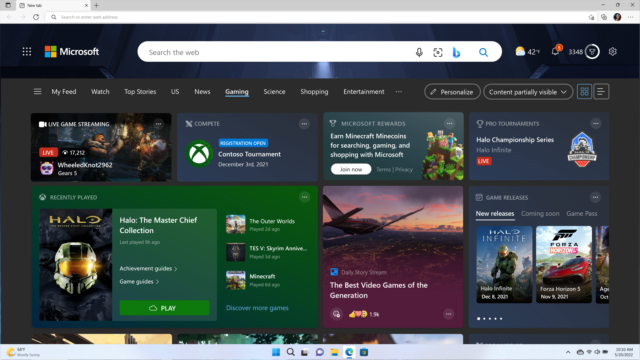 Microsoft has unveiled its plans to introduce a dedicated gaming home page to the web version of its Edge browser. Once introduced, players will gain access to a personalized gaming home page, filled to the brim with gaming news, live streams, highlights, and more.

Of course, seeing as though Xbox Cloud Gaming is supported on PC, the Gaming New Tab page also shows off the Xbox Cloud Gaming library and gives players a way to access their recently played games and other related content.

To help with performance, Microsoft is also introducing the Clarity Boost option. Enabling Clarity Boost makes gameplay from the cloud look sharper and crisper. This option will only be available when playing games in the Microsoft Edge browser on a Windows device.

For more casual games available on Microsoft Edge, the company is implementing its Games menu. Accessing this, players can easily jump into titles like Microsoft Solitaire, Atari Asteroids, and Microsoft Jewel. Additionally, the Edge exclusive title Surf can also be pulled up quickly and seamlessly.

To better help gaming performance on Windows 10 and Windows 11, Microsoft is also featuring an Efficiency mode when playing Xbox Cloud Gaming titles on Edge. This ensures games are running fast and smoothly. In order to do so, Edge automatically reduces resource usage when a PC game is launched such as Microsoft Flight Simulator.

Microsoft is also bringing new gaming-related updates to Windows 11, enriching the experience for players. Soon, windowed games will be better optimized to deliver improved latency, Auto HDR, and Variable Refresh Rate. This is a feature already being tested by Windows Insider Program. Windows 11 will see the introduction of a new HDR calibration app as well as a Game Pass Widget as well. Finally, controller bar showcases the most recent games, and shortcuts to game launchers, including the Xbox app. Controller bar also enables users to jump back into their games or access Xbox Cloud Gaming without the needing the use of a mouse and keyboard.

Of course, this news drops days before the big Xbox and Bethesda Games Showcase where the company will show new announcements and trailers for games coming later this year and beyond.

Samsung is hosting its next major Galaxy Unpacked keynote on August 10th, 2022. It is here that the company is expected to reveal a series of new products just in time for the late-summer period. The company has already been teasing what we may expect to see from the Galaxy Unpacked. In a teaser trailer,...
Steve Vegvari
1 hour ago

2022 marks the grand return of Toronto's Canadian National Exhibition (CNE) and with that comes the return of the CNE Gaming Garage. Powered by AMD, the fourth annual CNE Gaming is hosting a series of esports tournaments with over $22,000 on the line. The CNE Gaming Garage will be presenting two packed weekends full of...
Steve Vegvari
2 hours ago

Apple today released iOS 16 beta 5 and more for developers today. These new releases included some new features, such as bringing back the battery percentage to the battery icon in the status bar on iPhone. Also, for finding devices such as your iPhone from Apple Watch, there’s a new alert sound. Some other minor...
Gary Ng
15 hours ago