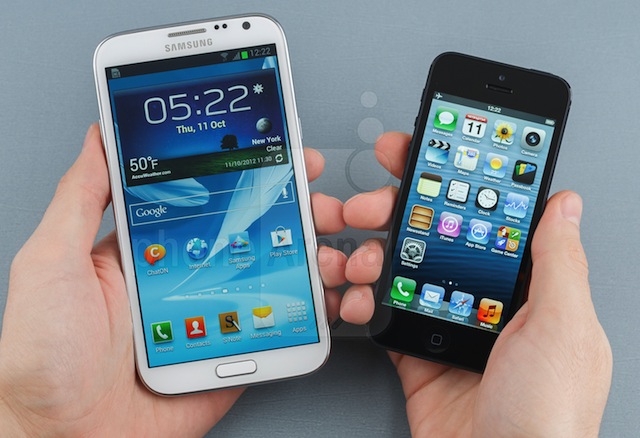 Phablets i.e small sized tablets with 5.0” – 6.9” screens (e.g Samsung Galaxy Note) are struggling to compete in the smartphone and tablet market, with only 2% share of total user base, according to a report by analytical firm Flurry. The study also notes that medium sized phones like iPhone, i.e between 3.5” – 4.9” screens, are the most popular devices with 69% market share.

Flurry, which now detects over 1 billion smartphones and tablets in use around the world every month, noticed activity on more than 200 unique device models. During that, the following 5 groups emerged based on screen size: 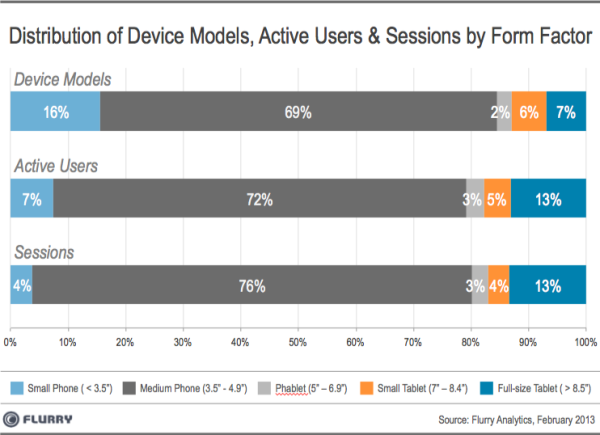 The ‘is it a phone or is it a tablet’ devices a.k.a. phablets, seem to secure a mere 3% of active user base, while mid-sized smartphones appear to dominate with 72% share.

“The top bar in the chart below shows how the top 200 device models break down by form factor in the market. Starting from the left, 16% of devices have screen sizes that are 3.5 inches or fewer in diagonal length. 69% of devices are between 3.5 inches and 4.9 inches, which includes iPhone. The light gray are made up of “phablets” such as the Galaxy Note. The orange are small tablets such as the Kindle Fire and iPad Mini. Finally, the far right shows that 7% of the device models in use are full sized tablets such as the iPad”.

One explanation for the high concentration in time spent in medium sized smartphones could be that consumers watch videos from their smartphones on-the-go, whereas they opt for a bigger screen (computer or TV) instead of phablets, to watch video when at work or home.

Twitter on Friday confirmed a December 2021 security breach that stole data from more than 5.4 million user accounts using a zero-day exploit — reports BleepingComputer. The hack exploited a vulnerability in the mechanism that Twitter lets users link email addresses and phone numbers to their accounts. Threat actors were able to submit an email...
Nehal Malik
7 hours ago