Apple Distinguished Educator Mike Lang is using Dr. Martin Luther King Jr.’s legacy to show his kindergarten and first-grade students at Laura Dearing Elementary School in Las Vegas that they have the power to change the world. 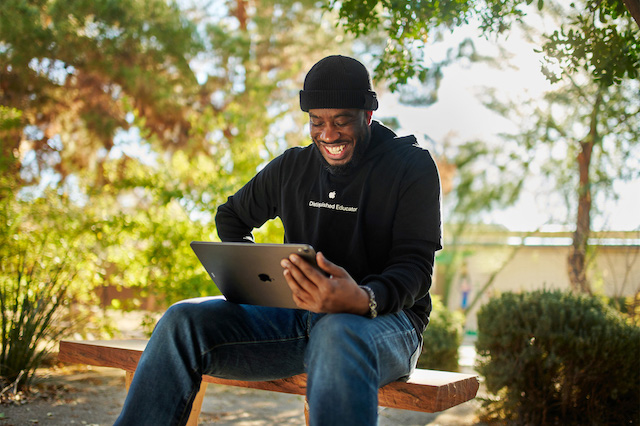 Incorporating interactive workbooks in Keynote on iPad, Lang’s three-part learning project is designed to show students they matter, help them examine Dr. Martin Luther King Jr.’s life, and encourage them to be the change they want to see in their Las Vegas community.

Students will use the iPad to capture and edit images of themselves, their family, and their neighborhoods, and then craft their stories about why they matter using the PBS KIDS ScratchJr coding app on iPad.

“My hope for all my students is that they see and consider themselves as citizens of the world who are responsible for helping others be successful,” Lang says.

“I saw how technology could transform and transfer information to students far more efficiently than me trying to explain it,” Lang says. “I became a digital learning coach after that and started to spread the gospel of having kids make things with devices. I’ve been blessed to grow with the evolution of digital in classrooms.”

Lang believes it is the responsibility of every teacher to ensure their students understand the role they can play in changing the world.

Back in October, Apple confirmed its head of hardware design, Evans Hankey, was departing from the company after just three years of replacing the famed design chief Jony Ive. Now, Bloomberg’s Mark Gurman reports Apple won’t be replacing the coveted design chief role, but instead having its entire team report to the company’s chief operating […]
Gary Ng
31 mins ago