Microsoft has today released a new ‘Mixer Create’ game streaming app for iOS and Android, which allows players to stream on the go and share experiences in their favorite mobile games (via GeekWire). Users can broadcast games, join streams with friends, pair with other devices like a PC or Xbox, engage in text chats and manage profiles using the new app. 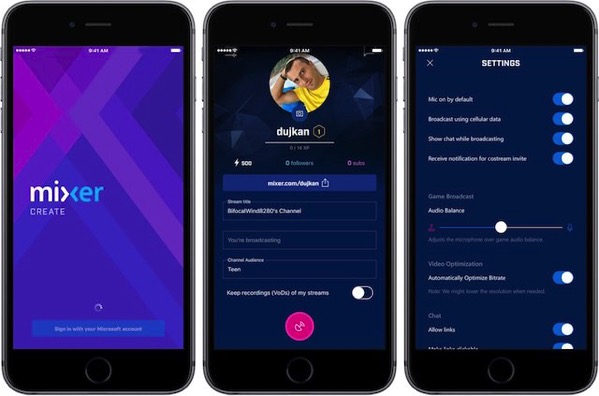 For those who aren’t aware, Microsoft acquired game streaming service Mixer, then known as Beam, last year, rivalling the likes of YouTube Gaming and Amazon’s Twitch, which allows users to livestream and watch games and other content.

According to Microsoft, the new Mixer mobile app is not only an extension of the core function of broadcasting games but also as a social outlet, similar to something like Facebook Live.

“Heading to PAX? Going on an adventure? Waiting in line for the latest new game? With Mixer Create you can now go live from anywhere and share your experiences with your community in real-time”. The app was previously in beta testing, but now it is widely available and works with all Android games and iOS games with the “ReplayKit” function enabled.

Mixer seeks to differentiate itself with features including low-latency streaming, the ability for up to four broadcasters to stream to a shared chat experience, and ways for viewers to interact with games as they’re streamed.

You can download the Mixer Create app using the following App Store link.

Citing unnamed sources and internal documents, CNBC is reporting that Google is testing new AI-powered chat products to compete with OpenAI’s ChatGPT. Google is said to be testing a ChatGPT-like chatbot called 'Apprentice Bard,’ which uses the company's LaMDA technology. The said chatbot is being tested by Google employees, who ask the bot questions and receive...
Usman Qureshi
28 mins ago

According to a report by Semafor, Microsoft's Bing search engine will incorporate a faster, richer version of ChatGPT called 'GPT-4' into its product in the coming weeks. Citing people familiar with the matter, the source says the latest update of ChatGPT software responds much faster than the current version. The sources also say that GPT-4 offers replies...
Usman Qureshi
53 mins ago