According to the latest data from web analytics firm StatCounter, mobile and tablet devices accounted for 51.3% of internet usage worldwide in October compared to 48.7% by desktop, making it the first time mobile web browsing has surpassed desktop computers. “This should be a wake up call especially for small businesses, sole traders and professionals to make sure that their websites are mobile friendly” said Aodhan Cullen, CEO of StatCounter. 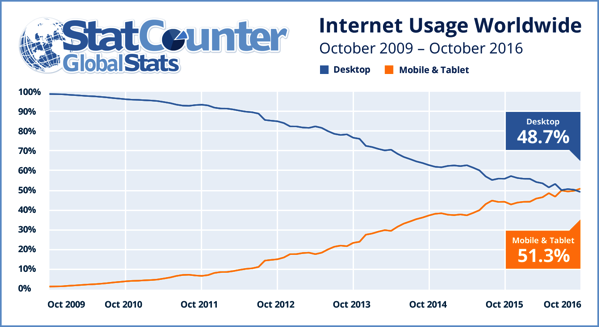 The data however indicates that desktop browsing remains the leader in some parts of the world, such as the UK, where it accounts for 55.6% of browsing, the US where it accounts for 58%, and Australia with 55.1% share. Although, it seems only a matter of time before they follow the global trend, with mobile taking the majority of web browsing.

“Mobile compatibility is increasingly important not just because of growing traffic but because Google favours mobile-friendly websites for its mobile search results”, said Cullen. “Post-Brexit, UK businesses should be aware, as they look to increase trade outside the EU, that India for example has over 75% internet usage through mobile devices.”

Meanwhile, The Guardian’s data shows another interesting trend. It seems that an on an average weekday, just over 40% of visitors to the site are reading on a desktop, while that number drops to just under 30% on a weekend. “The rest are using a combination of mobile browsers on a tablet and smartphone, or the mobile app”.

The trend towards mobile browsing was identified by Google several years ago, and the search-engine giant has since accelerated the shift with changes to its search favouring mobile.