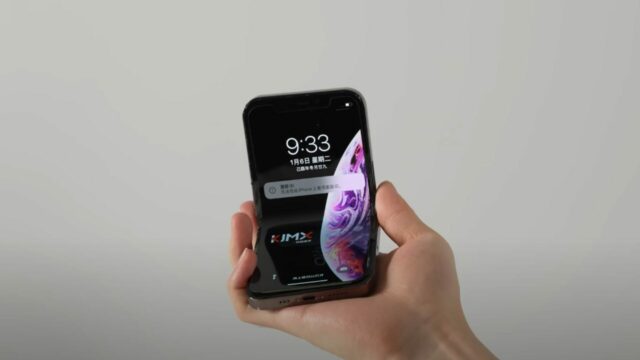 A group have modders have taken it upon themselves to create a functional foldable iPhone. Beating Apple to create their own, a China-based group known as The Aesthetics of Science and Technology (AST) says they have successfully created a foldable iPhone via mods, via Engadget.

In a YouTube video published by the group, the functional device was created using a Motorola RAZR, iPhone X screen, and other components made from a 3D printer. Ultimately, for better or worse, the foldable iPhone looks and functions as you could imagine.

As explained in the video, AST used an iOS jailbreak to allow the Apple software to continue running over a foldable display. It also enabled the group to utilize special functionality such as split-screen mode and usage.

Despite its functionality, AST did have to take a few concessions to get the device to work. For instance, the device has a smaller battery than a traditional iPhone. Additionally, there is only one working speaker on the device. Plus, due to the modifications, the phone does not offer water resistance. Though, that’s not any surprise.

This year, Samsung launched its Galaxy Z Flip 4. This unofficial iPhone is very reminiscent of Samsung’s device, not only in functionality but by size as well. When folded the iPhone fits in the palm of a hand. The only stark design element is the sizeable gap once closed. The modded iPhone isn’t able to fold flush against itself. Its rear hinge is also pretty archaic when compared to mainline foldable smartphones.

The timing of AST’s device is interesting to note as well. There has been the odd rumbling here and there that Apple may be developing its own foldable iPhone. Apple analyst Ming-Chi Kuo once claimed that the company may release the device in 2023. Early reports claim that it would be an 8-inch device with a QHD+ flexible OLED display.