The folks over at 9to5Mac have taken design cues from a bunch of rough sketches accompanying the FCC filings, that reveal Apple’s plans of updating its most popular Mac accessory, the Apple Wireless Keyboard, and have visualised a more modern version of the keyboard based on latest Apple products. The source notes that in addition to new and improved Bluetooth 4.2 connectivity, Apple’s filings clearly show design deviations from the existing model.

Apple’s new found love for the Silver, Space Gray, and Gold trifecta of colors has permeated to almost all of their products, from the new MacBook, to Beats headphones, to the iPhone, iPad, and Apple Watch, all the way down to Apple gift cards. This new, colorful world would only be truly complete with keyboards to match. With an increased number of wireless keyboards being used with iOS devices, it would be fantastic to have matching finishes available across the line.

Both white keys (like the current Apple keyboard) and black keys (like those on MacBooks) would look nice though Apple would likely choose any one of the two options. In general, iOS devices, both silver and gold, use white as their accent color.

Apple has also recently introduced the new font San Francisco, that has also been used as the keycap font for the new MacBook, so the future Apple Wireless Keyboard could very well feature the new font. Finally, the butterfly keyboard mechanism introduced with the new MacBook may also trickle down to the wireless keyboard. 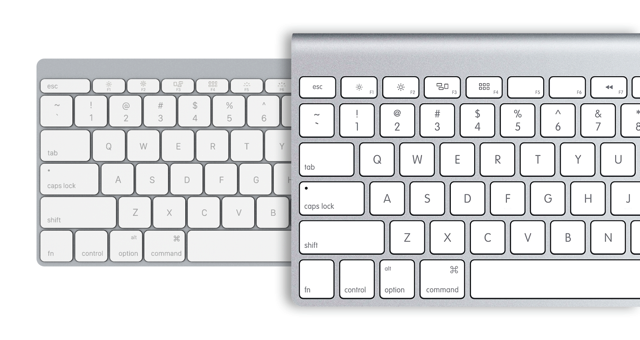 Check out the following images as well and tell us which color configuration you like best.

Apple's new Crash Detection feature, available on iPhone 14 and the company's latest Apple Watch models, is designed to automatically contact emergency services in the event of a severe car crash.  However, it can sometimes mistake a rollercoaster ride for a car crash (via Reddit). One Reddit user found this out the hard way when...
Nehal Malik
16 mins ago

Amazon announced on Wednesday a new lineup of Fire TV Omni televisions, this time with QLED and also its “smartest TV lineup ever.” The new Fire TV Omni QLED Series is available in 65 and 75-inches, with 4K Quantum Dot Technology (QLED) displays and full-array local dimming for up to 96 zones. Dolby Vision IQ […]
Gary Ng
19 mins ago