Moneris announced yesterday its gift and loyalty program for medium to large businesses is now compatible with Apple’s Passbook application. This means existing merchants now have the option to digitize their physical gift or loyalty cards right into Passbook. 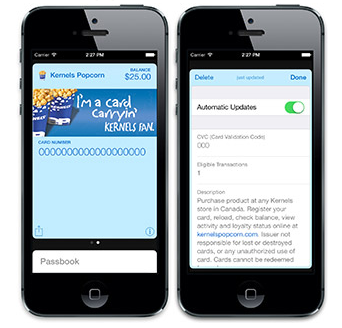 “One of Passbook’s biggest challenges to date has been the slow uptake in point-of-sale (POS) acceptance by merchants,”

The debit and credit card processor launched a pilot Passbook service with Kernel’s Popcorn and their gift loyalty card program last month, across its 70 locations in Canada, which received positive feedback from customers.

Penny Daniels, CFO of Kernels Popcorn said the company “is proud of its participation in this innovative program in Canada,” and added “We are seeing customers adopt the service to virtualize their loyalty and gift cards to Passbook. In this ever increasing mobile environment, this program is a valuable tool for the customer to keep their Popcorn at their fingertips!”

This comes as positive news for iPhone users, as Passbook is built right into iOS and enables users to seamlessly access gift cards, coupons, boarding passes and more. With more merchants jumping onto Passbook, that means one less card for you to carry in your wallet.

Anyone try out the Kernels Popcorn Passbook integration yet?