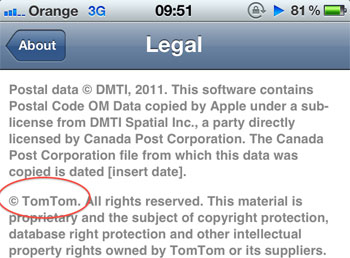 There was some worry Apple would be switching away from Google Maps in iOS, but Google confirmed a new deal was signed at the recent D9 Conference. Apple has acquired mapping companies in the past, and some new evidence revealed in iOS 5 by MacRumors indicates a native solution is all but inevitable:

The companies listed in iOS 5’s legal notices include the following diverse companies under the “Map Data” section:

It was also noted Urban Mapping was a partner of Placebase prior to being acquired by Apple, and Waze (also a Google Maps competitor) appears to be the perfect solution for Apple’s hint at crowd-sourced traffic data. This was revealed by Steve Jobs during an interview regarding “Locationgate”:

Is traffic the only thing you are using thatÂ collectiveÂ data for, or do you have other plans?

Jobs: We mention the traffic service and I think that is all we are going to mention at this point in time before we have something to announce.

But you are not saying that is the only thing you might use it for?

Jobs: We are building a crowdsourcedÂ databaseÂ based on traffic and that is what we are saying.

I love Google Maps on the iPhone. The integration with apps and the rest of the web is just perfect. It’s going to take quite a bit of work to beat the Google Maps experience, but you can count on Apple to take its time to create a better solution.