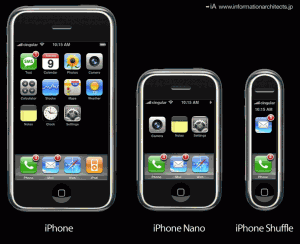 As promised, the Wall Street Journal has provided more details of the next smaller iPhone, along with MobileMe and iTunes. Here’s what Yukari Itawani Kane added:

The person who saw the prototype of the new iPhone said the device was significantly lighter than the iPhone 4 and had an edge-to-edge screen that could be manipulated by touch, as well as a virtual keyboard and voice-based navigation. The person said Apple, based in Cupertino, Calif., also plans to upgrade the iPhone 4.

The new MobileMe file-storage and music service could be available as early as June, depending on the progress of licensing talks that are in their preliminary stages, the people familiar with the situation said. Apple had planned for the service to be available a year earlier.

The new service would give users access to their iTunes libraries from, say an iPhone or iPad, instead of requiring that the devices be synced by cable with a computer and use space to store the actual files, the people said. The new service likely would be compatible with the iPhone 4, one of the people said.

It’s obvious the next iPhone “Nano” would not have a physical keyboard. Steve jobs hates buttons. Could the Home button be eliminated via an “edge to edge screen”? We’ve heard these rumours of saying good bye to the Home button before.

What’s interesting is to see the details of voice navigation. This is one feature that has never caught on, mainly because it’s been poorly done, and people don’t like talking to themselves in public. Could Apple be ‘reinventing’ voice navigation?

It looks like a cloud-based iTunes service is imminent. Is Apple going to start providing a quick and easy way for you to download your entire iTunes collection? It sounds like it. Apple has been working on increasing their capacity with a new data centre in North Carolina.

Would you like an iTunes cloud service? What about an iPhone ‘Nano’?