Chamberlain’s ‘MyQ Home Bridge’, which was unveiled in January at CES and was expected to go on sale in April, is finally available for users to purchase from Chamberlain’s website for an introductory price of US $49.99 (via MacRumors). For those who already own a MyQ garage door opener, the new MyQ Home Bridge will bring Apple’s HomeKit support to any compatible garage door opener. 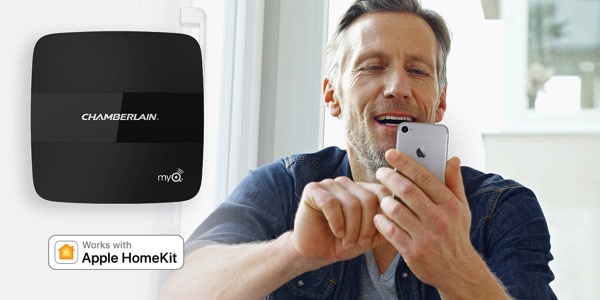 With the new Home Bridge, users can control their garage door with Siri, set scenes within the Home app, and connect a MyQ garage door opener with other HomeKit-enabled devices. For instance, users can make a smart thermostat or light bulb adjust accordingly to when their garage door opens or closes. Chamberlain’s series of MyQ lighting accessories can also be connected to HomeKit, and be controlled with an iPhone, iPad or Apple Watch.

“The MyQ Home Bridge adds smartphone control to your MyQ enabled garage door openers (without built in Wi-Fi) and MyQ lighting. Get peace of mind knowing the main access point to your home is secure. This easy to install product allows you to check the status or control your MyQ products from anywhere.

Never worry again if your garage door is left open. Plus, this product is compatible with Apple HomeKit and Siri Voice Control. If you are an existing MyQ user with an Apple device, upgrade your garage door opener and MyQ lights with HomeKit to make your smart garage even smarter.”