Canada’s Mysa smart thermostats have just received a bunch of handy updates that save your perfectly-dialled-in winter heating schedules, turn off your Mysas automatically, and more, according to the latest email sent to customers. 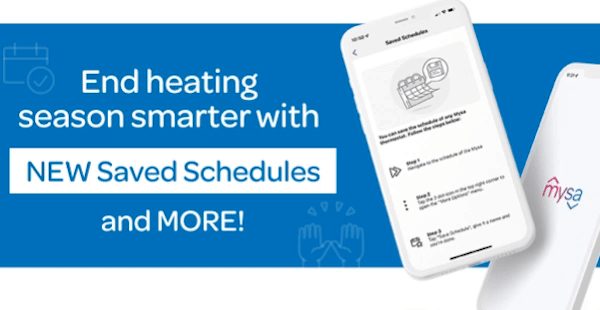 With the new ‘Saved Schedules’ feature, you can easily save your winter heating schedules, turn your Mysas off automatically, and be ready to hit the ground saving when the cold weather returns.

And if you have a fluctuating weekly schedule, you can save multiple schedules tailored to your timing and easily switch between them on any of your Mysa thermostats.

Similarly, the new ‘Off Mode’ lets you follow a Schedule to turn your heat back on, without even opening the app. You can still use “Hold until I change it” if you’d prefer to keep them off.

To create a Saved Schedule:

Watch the following video above to get a better idea of how to use the Saved Schedule feature on your Mysa thermostat.

Click here to check out Mysa smart thermostats on Amazon–they work with Apple HomeKit and more.