NBA Launches Facebook Messenger Bot in Time for the Finals

The NBA has released a chat bot for Facebook Messenger, just in time for the first game of the NBA Finals between the Golden State Warriors and the Cleveland Cavaliers.

Today David Marcus, vice president of messaging products at Facebook, wrote a Facebook post saying that you can start talking to the bot by simply visiting m.me/NBA. 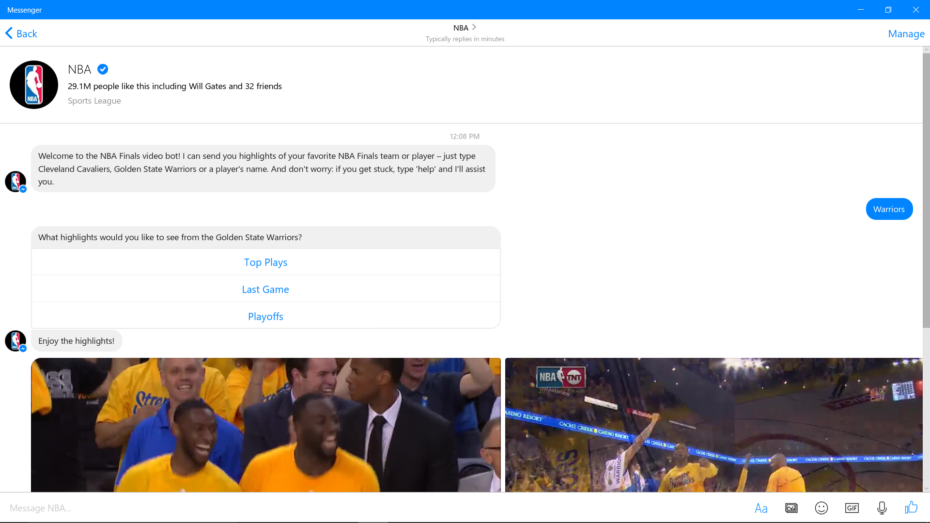 Of course the NBA has a large fan base, but the launch of this bot is also significant because Facebook is specifically promoting it as one of the early examples of what’s possible what chatbots in the messaging app. Facebook has previously promoted chatbots from the likes of CNN, Poncho, and Spring.

This bot sends users highlights of top plays, the playoffs, and the last games for teams or players in the NBA Finals. The video clips are displayed in a horizontal scrollable list; when you hit the “Watch” button you’re taken to pages hosted at bot.nba.com. You can even tell the bots to send you alerts right when games end, or not.

DoorDash Canada has today released its 2022 End of Year Trends Report revealing the best and quirkiest food and ordering trends to come out this year. DoorDash saw a variety of food preferences in 2022, from the healthiest eaters and coffee lovers to good pet parents, and the biggest spenders. Torontonians tuned out to be...
Usman Qureshi
2 mins ago

Apple has highlighted its built-in accessibility features across iPhone, iPad and Apple Watch, in a new video shared this morning titled, ‘The Greatest’, showing how its software features offer new tools for those with disabilities. “At Apple, we believe accessibility is a human right. Innovative features like Door Detection, Sound Recognition, Voice Control, and more […]
Gary Ng
58 mins ago