Nearly 8% Of All Cell Phones Sold Worldwide Are iPhones [Report]

Latest mobile device data released by research firm Gartner reveals that Apple now accounts for 7.9% of global mobile phone market selling 33.1 million iPhones during the first quarter of calendar 2012 (via Apple Insider). The report represents worldwide mobile device sales to end users instead of total shipments. It is notable that the 33.1 million iPhones that Gartner says Apple sold, is off by two million from the 35.1 million Apple itself reported last month. During the same quarter, Samsung became the largest mobile device maker in the world overtaking Nokia, the market leader since 1998. 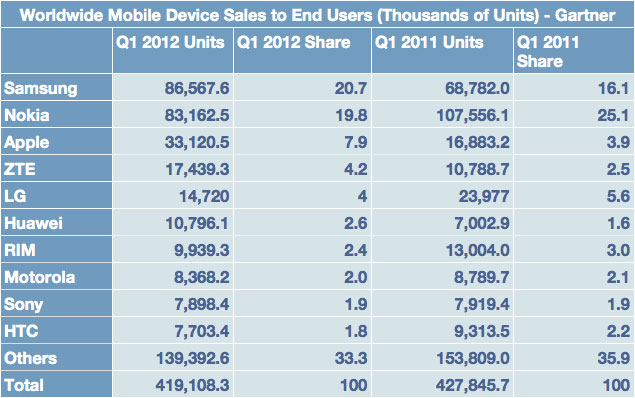 Apple’s 7.9 percent share put it squarely in third place, well behind Nokia but still comfortably ahead of ZTE, which sold 17.4 million units in the quarter and took 4.2 percent of the market. In fifth was LG, which sold 14.7 million handsets for a 3.5 percent share.

Motorola came in eighth, selling 8.4 million handsets and taking a 2 percent share, while Sony Mobile Communications was close behind with 7.9 million sold and 1.9 percent of the market. Rounding out the top 10 was HTC, which sold 7.7 million devices and represented 1.8 percent of the market.

Gartner’s research also notes that Samsung sold the most smartphones during the quarter i.e 38 million as compared to the 33.1 million iPhones sold by Apple.