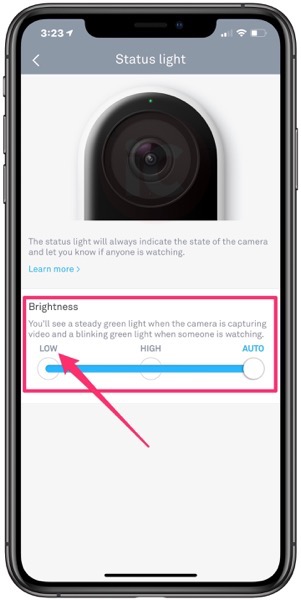 Google emailed Nest customers yesterday to let them know of changes applying to their security camera products and doorbells, an effort part of the company’s “commitment to privacy.”

When your camera is turned on and sending video footage to Google, we will provide a clear visual indicator (such as a green light on your device).

The status light is a tiny LED on Nest cameras which previously could be turned off, which is convenient for those using a Nest in a baby’s nursery, or those looking to keep burglars at bay.

But now, the status light’s OFF option has been changed to LOW, while two other settings include HIGH and AUTO. The status light remains a steady green when video is being captured and blinks when someone is watching.

“We recently shared changes to how your devices will function to honor our commitment to privacy. We explained that you will always see a clear visual indicator when your Nest cameras are on and sending video and audio to Nest,” explains Google.

Nest also made changes to how emergency audio and video footage is recorded by Nest Protect and Nest Secure, rolling out in a week with an app update:

“As a result, the emergency recording feature will be turned off today, even if it’s currently enabled. In our next app update, if you want to enable this feature, please select each camera that you want to start recording during a smoke or carbon monoxide event, or start streaming during a security event,” says Nest.

Previously, automatic recording was enabled by default, whenever your smoke alarm would sound, for example.

“We’re making these changes for greater transparency and privacy in your home,” explains Google.

Naturally, those seeking to control their cameras are angry at this change, with many users venting on social media and on Reddit. Many have suggested spray painting (or nail polish) over the LED indicator or putting down a piece of black tape to hide its status.

What do you think about this change by Google?