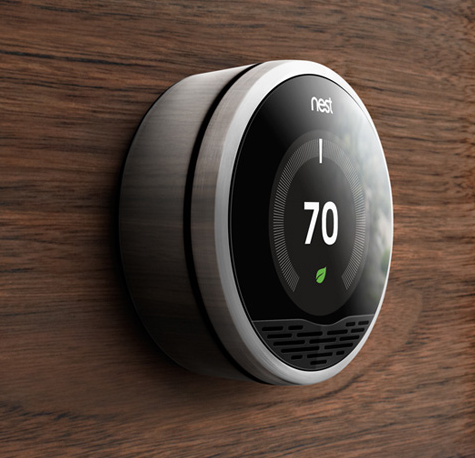 Nest Labs, the creators of the Nest Thermostat are apparently working on their next foray into the home: a smart smoke detector. That’s what sources have told former WSJ reporter Jessica E. Lessin:

Smart thermostat-maker Nest Labs has been developing a smoke detector that could go on sale as soon as later this year, we have learned from people close to the startup.

Those possible features include a subscription monitoring service that would alert you if smoke or fire is detected. One person said the device could communicate with the Nest thermostat, giving it a longer battery life by eliminating the need for it to have its own battery-draining wi-fi chip. We also hear that Nest has discussed features like the ability to silence the alarm by waving a hand in front of it and the ability to detect carbon monoxide.

Well-connected Kara Swisher from AllThingsD reports the device will be called ‘Protect’ and the details about a subscription monitoring model first reported by Lessin is actually not true. She goes on to say the smoke detector will be connected to the thermostat, as Nest aims to release more devices to connect your home:

Nest’s next product, which it is set to unveil soon, will be a smoke detector called Protect, according to sources.

The Nest Learning Thermostat was developed by former Apple hardware designer Tony Fadell, known to many as the ‘father of the iPod.’

You can check out our video installation tutorial of the second generation Nest below (it’s available from Amazon.ca for $249):

The Nest can be controlled from your iPhone or iPad, giving you complete control of the automated system no matter where you are in the world. How are you liking your Nest? Would you welcome a ‘smart’ smoke detector?