For the first time, Netflix has revealed the list of its 10 most popular original movies providing the clearest picture yet of what types of movies are most popular on the video streaming platform. According to Netflix, Chris Hemsworth’s ‘Extraction’ has delivered the biggest audience of any Netflix original movie so far (via Bloomberg). 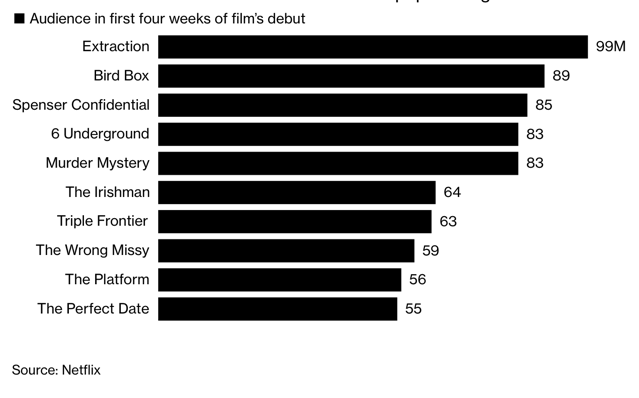 The above list shows that all four of the most-watched films are action movies or thrillers with prominent movie stars — Chris Hemsworth, Sandra Bullock, Mark Wahlberg, and Ryan Reynolds. The list also includes three comedies, including Murder Mystery, as well Martin Scorsese’s adult drama, The Irishman.

“We want an impactful movie every two weeks,” says Scott Stuber, the head of Netflix’s film division. “For one person, that’s Extraction. For another, it’s The Wrong Missy.”

All 10 of the movies were released in the last three years, most of them in the past 12 months, which makes sense when you consider that Netflix has added 43.6 million customers since the start of 2019. Each new release can reach a larger audience than its predecessors.

Netflix has released more original movies than any major Hollywood studio in recent years, with particular success during the COVID-19 global pandemic.