If your “Continue Watching” list on Netflix looks anything like mine, it probably contains many go-to shows, new Netflix originals, and odd movies and shows you’ve given up on. The latter of which you’ve probably wished you could erase and completely forget about. Netflix may be working on a solution to that problem.

Android Police wrote a report yesterday afternoon that they have discovered a new option on the Netflix app that has allowed them to remove titles from their Continue Watching queue. 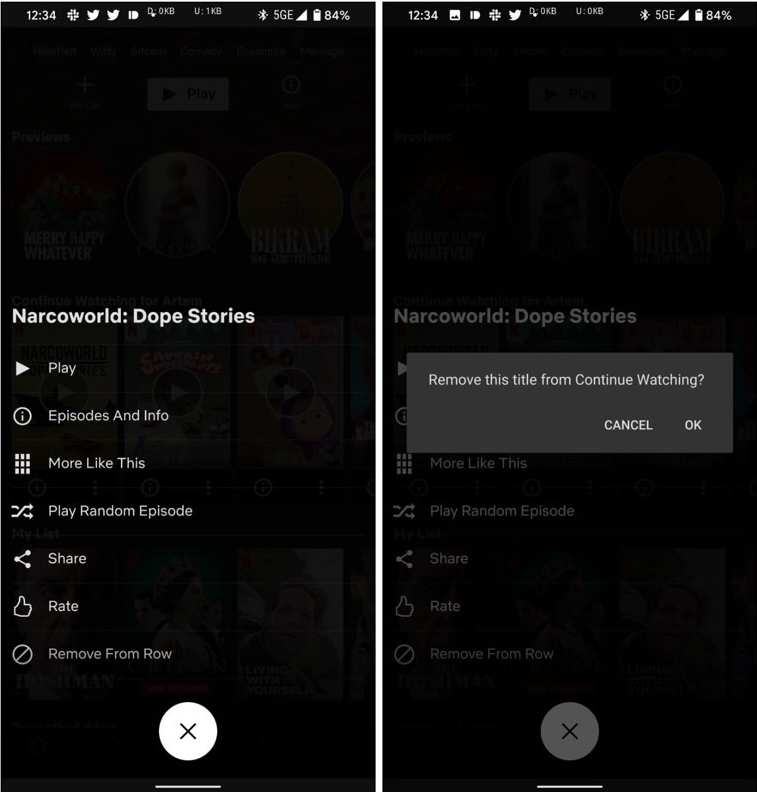 In the report, they indicated that a new menu selection is available once accessing the Continue Watching queue. Within that menu, Android Police discovered the usual Play, Rate, Share, etc. functions were present. On top of that, a “Remove From Row” option was also available. Tapping this option would then remove the title from the queue, unburdening the user from staring at the unwanted show or movie.

As of right now, there is no easy way to remove a title from the Continue Watching queue. The only way possible is by venturing on to the Netflix website and accessing the Viewing Activity in the settings menu.

In addition, the new menu also contained a shuffle feature, which has been rumoured to be in the works.

It is worth noting that as Android Police has mentioned, the new options were only available on one device owned by the company’s founder, Artem Russakovskii. This is likely due to Netflix rolling out an A/B testing phase for the new feature. Similar to other new functions, Netflix typically selects a small user base to experiment with the feature before a mass release. The feature was only accessible on an Android device. As of now, no reports have surfaced regarding iOS devices being able to access this feature in the testing phase.

While an A/B experimental test does not guarantee a wide release, it does give us hope that an easy to use tool to shave down our Continue Watching list may one day exist.

Apple announced this week its Maps team will be driving and walking across six Canadian cities next week. The Apple Maps team will be in Toronto, Montreal, Calgary, Vancouver, Edmonton and Ottawa from Monday, August 8, 2022. Apple says they will be “driving vehicles and wearing specialized backpacks with equipment to help us build the...
Gary Ng
7 hours ago