Netflix says users of the iPhone app can expect new enhanced search capabilities, with an update coming soon to allow queries for actors, directors and creators, on top of search suggestions. The new search features launched yesterday for Android phones and tablets:

Finally this rollout expands the search function on the iPhone by enabling members to search for actors, directors and creators. We also now provide suggestions related to the query, which allows members to more easily explore the contents of the Netflix catalog. The screenshot above depicts the search experience on the iPhone and shows the results for the query “ant” (left), the top people results matching the same query (middle) and a gallery featuring all videos available on Netflix starring Anthony Hopkins. 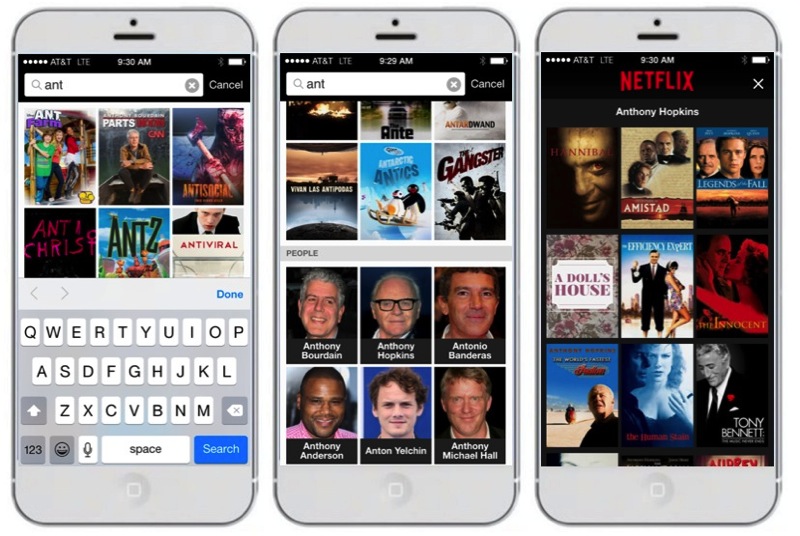 Essentially this will make discovering content by specific people such as actors easier, like Adam Sandler, who recently signed a four-movie deal with Netflix to release films exclusive to the streaming video service, a new front for the company.

“When these fine people came to me with an offer to make four movies for them, I immediately said yes for one reason and one reason only: Netflix rhymes with Wet Chicks,” said Sandler. “Let the streaming begin!!!!”

The deal will see Sandler’s Happy Madison Productions work with Netflix to premiere four films exclusively in 50 countries where Netflix operates—movie theatres are shut out of this deal.

Similarly, last week Netflix also announced the sequel to Crouching Tiger, Hidden Dragon, will be produced and released exclusively to its members on August 28, 2015, plus also have showings only in IMAX theatres.