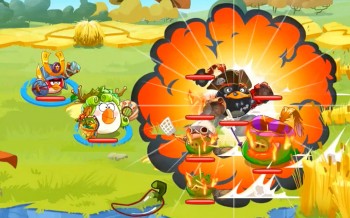 There seems to be no end to the Angry Birds franchise. Rovio’s latest edition combines everyone’s favourite birds and pigs into an epic RPG. Angry Birds Epic is currently only available in the Canadian, Australian and New Zealand app stores, with a larger launch scheduled for later this spring. Now I did have some hesitations about this game after what I still believe is the mess that is Angry Birds GO. If you haven’t, take a read look at our review of Angry Birds GO. But I decided to give Angry Birds Epic a go, and I’m glad I did. Here’ my video review of this epic game.

So as was the case with Angry Birds GO, this instalment of the franchise is a big change from the classic launching birds at structures. Angry Birds Epic is a turn based RPG. In my mind it looks very much like the original Final Fantasy games from the original Nintendo Entertainment System — of course with better graphics. From what I can tell about the storyline, you’re out to save the other birds from the evil pigs.

When you start, you’re the famous red bird, and as you battle along you’ll unlock other birds. While you can collect a lot of them, you can only battle with three at a time. When it’s your turn you have a couple of options from attacking, using a special ability, or even using potions. It’s very straight forward and when you start the game, it walks you through everything pretty well.

If you win a battle you collect experience and items. If you lose, you can spend coins to revive your birds to continue the fight, or let them die and you actually receive a little gift. Usually a couple of coins or even some potions. Then you can start the fight again. When you win a battle you get points and you’ll see a familiar 3 star screen. The more stars you get, the more items you’ll collect. You spin the wheel and whatever items end up beneath the stars, you get. If you don’t like the spin, you can try your luck again by spending some of the gems you have. 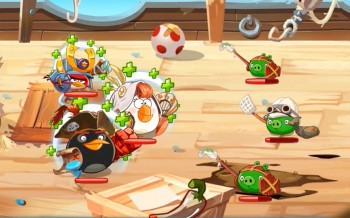 These items you collect will be used to build new weapons, armour, potions and other items you’ll need in the game. At some points you’ll even be offered deals on items if you want to buy them. Of course this is where the in-app purchases come into play.  You can always pay to advance the game faster and get items quicker. But, I’ve found it isn’t necessary. Sure it would be fun to speed it up, but you don’t have to. At no point – unlike Angry Birds GO – have I felt that I have to spend money to enjoy this game.

Moving through the game is very linear. There are times when you advance you’ll unlock paths you’ve passed and you can go back. But for the most part it’s straight ahead along a path. The map itself is fairly big but what I’ve found is it’s very cluttered. At times it’s tough to see where you might have to go because there is just so much on the screen. It’s especially tough on the small iPhone screen.

Overall I’m really enjoying Angry Birds Epic. It’s fun in the sense of an RPG because you’re increasing levels, learning new attacks and collecting items. But at the same time it’s no where near as complex as an RPG something along the lines of the old Final Fantasy’s. This is a great if you’re just looking to pick up the game for a few minutes to enjoy. If you’re really into RPG’s then you may find this a little too simplistic, but at the same time, it’s still a lot of fun. I recommend you at least download it and give it a try.

I’d really like to know what you think about the game, especially how it compares to Angry Birds GO and the in-app purchases.