When you start a new job, it is often customary to be welcomed to your new work place. Typically, your supervisor of trainer shows you to your work space and may hand you a stuffy manual to read about the company. Apple does things different. Take a look at this note you would receive, upon starting a new position at Apple. 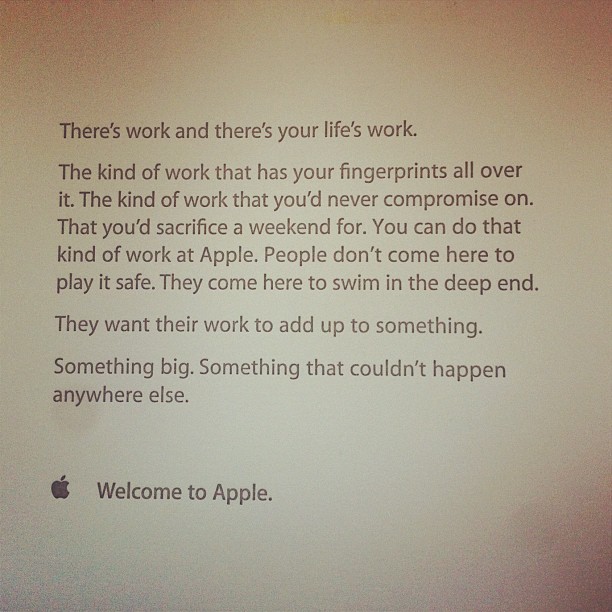 Quite an inspirational letter, to get you started. Every line of the letter is true. Apple products change the world, and I can only imagine that it would be beyond amazing to be a part of the experience. Instagram user “M” posted a photo of this letter. He had this taped to his dresser for years, and it is still inspirational to him.

In my personal experience, I have never been welcomed to a new company in this way. Usually, after being hired, I have been sent away on a training course some where, then put to work right after, with no real formal welcome. I think I’ll be printing this out, and putting it up on the wall beside my desk. These are not just inspiring words for working at Apple, but for everything we do in our lives, everyday.

Citing two sources close to the Indian government, a report by CNBC News is claiming that India is exploring options to bring some of Apple’s iPad production to the country from China. The officials are said to be in discussions with Apple executives regarding the proposal, the sources said. The Cupertino giant, which has been producing...
Usman Qureshi
16 mins ago

Waze has today launched its first-ever dedicated app for cars, which will be available for select vehicles with Google built-in, starting with Renault Austral Hybrid and Renault Megane E-Tech. With this new experience, Renault drivers will have all Waze real-time routing, navigation and alerts, plus settings, preferences, and saved places, built into their car display....
Usman Qureshi
32 mins ago

[caption id="attachment_386668" align="aligncenter" width="800"] Image: Ledger[/caption] Tony Fadell, a famed product designer and former Apple Senior VP who is credited as being the "father of the iPod," has come out of his rather quiet life of investing and writing books about his career to lead the development of hardware cryptocurrency wallets at Paris-based Ledger. Cryptocurrency...
Nehal Malik
43 mins ago