A new patent application from Apple details how a future iPhone could utilize a virtual SIM card that also integrates Near Field Communication (NFC).

There are a few advantages of utilizing near field technology. For one, it would allow consumers to bypass carriers when purchasing an iPhone, According to 9to5Mac, a costumer could instead utilize a carrier-chooser app, for instance, to select the network of their choosing. This would allow Apple to sell the iPhone through their retail stores, cutting carriers out of the sales. 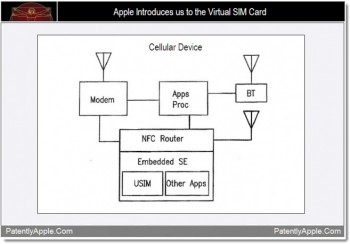 Another benefit that Apple highlights in their application is the ability to produce an even “thinner, astoundingly beautiful, next generation iPhone”, thanks to the lack of a SIM card slot.

Apple’s solution is very complex and unless you’re grounded in this particular field you’re going to get lost. However, while the patent discusses the use of Universal Subscriber Identity Module (USIM)) cards, the real discovery here is that Apple is considering a model of iPhone that may use a next generation Virtual SIM card that includes a NFC Router and tamper-proof security. It’s only in this mode that Apple’s background description of creating a thinner device makes any sense.

In Apple’s patent FIGS. 5a and 5b shown below we see two exemplary embodiments of a hardware architecture (502, 504) for a “virtual” Subscriber Identity Modules (SIMs) according to the invention. Unlike prior art solutions, the exemplary embodiments of FIGS. 5a and 5bstore a USIM 506 within an embedded Secure Element (SE) 508, which isn’t a removable card. The first illustrated embodiment 502 of the present invention (FIG. 5a) additionally includes a Near Field Communication (NFC) router 510.