Despite Apple USA launching a $25 iTunes gift card promo with new Apple TV sales, it doesn’t mean a new model is coming even though rumours are rampant a refresh could come as early as April. 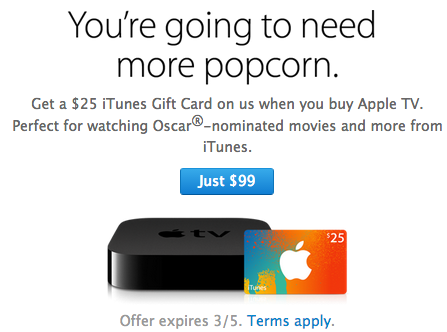 Fellow Canuck Jim Dalrymple from The Loop has provided his short and concise insight on the matter, pouring cold water on a LA Times report from today alluding a new Apple TV is coming. Dalrymple, known to have a rock solid track record when it comes to verifying Apple rumours, gave a classic “nope” response.

Earlier today at its annual shareholder meeting at its Cupertino headquarters, Apple CEO revealed Apple TV sales topped $1 billion in 2013, which is pretty significant for the device long deemed the company’s ‘hobby’.