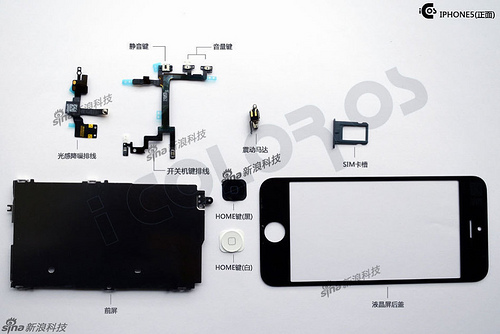 The so-called iPhone 5 has yet again leaked out. This time your eyes aren’t going to be looking at one device, instead they will be strolling through the various disassembled parts of the iPhone 5. Today’s leak comes from iColorOS (as noted by NoWhereElse.fr), and presents the front assembly of the rumored iPhone.

One disassembled part I have yet to mention is the SIM tray. Depending on if you currently own an iPhone, this tray appears to be much smaller. If that’s what you thought, you’re correct. The SIM tray is known as a ‘nano SIM tray,’ as Apple is rumored to adopt smaller SIM cards for the iPhone 5.

As normal, these leaks include nothing shocking. They just continue to mount sufficient proof of what the iPhone 5 will resemble. The glass display for example, it’s always near 4-inches. I would fail to name a leak in these past few months providing proof that next generation iPhone would have a 3.5 inch display.

I thought this iPhone leak was overall interesting. Many of these parts we’ve seen in separate part leaks, but now we finally get to see them together. What do you think of this leak?

Apple on Monday evening announced the best apps of the year, as part of its annual App Store Awards for 2022. These awards highlight 16 apps and games that “inspired users to engage more deeply with the world, expand their imaginations, and stay connected to friends and loved ones.” Winners were chosen by Apple’s global […]
Gary Ng
34 mins ago