Today, reports claim that code revealed inside iOS 4 is showing that a new iPhone model is ready to begin field testing. The code, pictured below, carries the description of “iPhone3,2″ and iPhone3,3” and seems to indicate that these devices can “auto-activate”.

In this case, auto-activation is said to allow carriers to test the devices without a manual activation using iTunes, as is currently required for retail iPhone units.

Way down deep within iOS 4 is a pretty intriguing block of code. Our source says that the code queries the device, and if the device is either a CDMA iPhone or iPad 2, the device will auto-activate, thus bypassing the need for iTunes.

This type of iPhone code name shows up every year when Apple is planning a new iPhone device. Evidence of future Apple devices typically is found deep inside the current iOS, whether 3.0 or 4.0. As an early example, the code “iPhone3,1” appeared in iPhone OS files in March 2009, which then, 15 months later, became the new iPhone 4.

Since the new iPhone code carriers the name “iPhone3,2” and “iPhone3,3”, instead of “iPhone 4,1”, this suggests that any new hardware will be a minor revision to the existing iPhone 4.

At this time it is unclear if these new devices are new iPhones for next year 2011 or if they are the rumored new CDMA iPhones for USA wireless carrier Verizon. 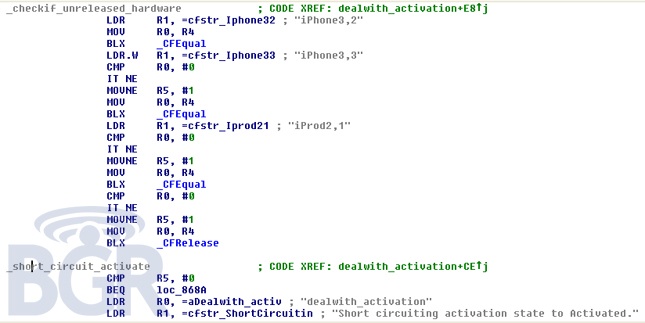