New iPhone Sales Will Break Records But Won’t Surprise Us

When Apple takes the stage at the Yerba Buena Center on Wednesday morning, the company will reveil its sixth generation iPhone. If you’ve followed us along the way, we have had a countless number of leaked iPhone part posts.  I am stunned by the consistency between each and every leak; they all relate mutually in some way, whether it be screen size, the mini dock connector, or two-toned-back plate.

Brian White of Topeka Capital Markets analyzes trends in the technology world and predicts that Apple will sell a smoking 10 to 12 million new iPhone handsets during the current quarter, which ends on September 30th. If you take into consideration the iPhone will hit the market on September 21st, Apple would sell over 1 million units a day until September’s end. 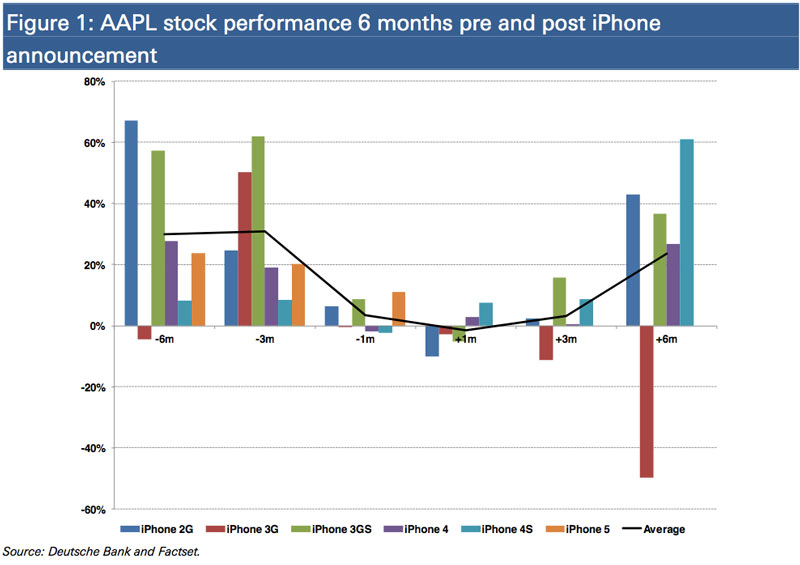 The iPhone sales may break records, but that doesn’t exactly create a reasoning for stock prices to surge upwards. Chris Whitmore of Deutsche Bank notes that the sixth generation iPhone will be the largest upgrade Apple has released; that is if the rumors are correct.

Whitmore mentioned that the iPhone should feature a LTE radio, 4-inch display, and re-designed form factor, thus not surprising us. As a result, the stock prices may remain steady, or even shift downward. The upward shift will come briefly after Apple comes public about their New iPhone sales.

“We expect this feature set to drive a massive refresh cycle which should be reflected in Apple’s valuation over time,” he said. “In short, we’d use any weakness in AAPL around the iPhone 5 event as a buying opportunity.”

The graph above describes Apple stock performance prior and after an iPhone announcement. The outcome has never immediately resulted in the share price boosting, in fact many years shareholders had to wait three to six months.