Ahead of this year’s Manulife Heart & Stroke Ride for Heart fundraiser event, the official H&S Ride for Heart app has been updated by the Heart and Stroke Foundation of Canada, offering weekly fitness challenges that will help Canadians get ready for Ride day on June 6. 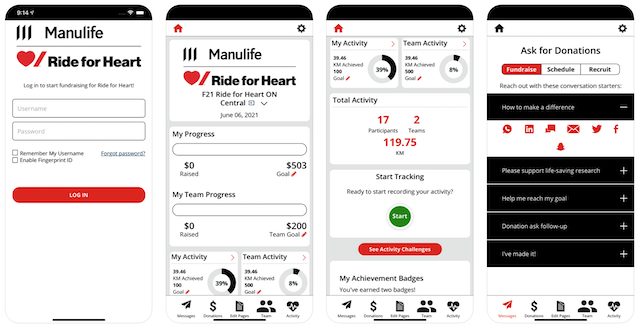 The all-new app includes easy to use tips and tools that help people reach their fundraising goals. On event day, the app will feature video and audio content from across Canada to share personal stories from people who have experienced heart disease and stroke and drive home the importance of Heart & Stroke’s work.

“Ride has been a signature cycling fundraiser in Toronto for more than three decades. Now with the public’s ability to exercise and track goals on virtual platforms we’ve expanded the event nationally to engage even more Canadians in our cause,” said Doug Roth, CEO, Heart & Stroke.

This year’s Ride for Heart has new and fun ways for people to share their experience virtually. Thousands of people will ride, run or walk heart-shaped routes for this year’s event and can either create one using the new Ride for Heart app or make their own using Google Maps.

Participants are encouraged to share photos of their finished heart-shaped routes on social media.

Since 1988, the Manulife Heart & Stroke Ride for Heart has raised over $77 million. Those funds support heart and stroke research, awareness and advocacy efforts.

Supercell, a Finland-based game developer owned in large part by China's Tencent, launched an external store for in-app purchases back in June to circumvent Apple's and Google's infamous 30% commission on all transactions made through the App Store or Play Store, respectively. The Supercell Store launched with digital items for the popular mobile strategy game Clash...
Nehal Malik
1 hour ago