WhatsApp for iPhone has today been updated to v2.18.90 with a handful of new features, including a suspicious link detection feature, notification extension support and a search option for the Status tab. The updated app lets iOS users view images or GIFs directly from the notification panel itself, although the latest version only works with iOS 8.0 or later. 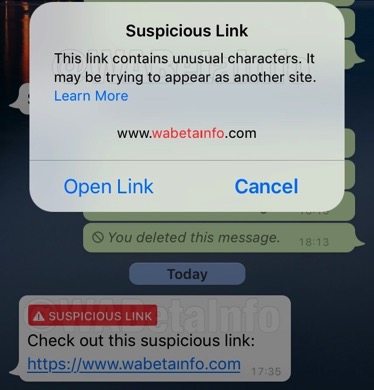 Using the new suspicious link recognition feature, WhatsApp now analyzes any incoming messages that contain a link in order to detect if it’s suspicious by looking for unusual characters. As demonstrated by Wabeta (shown above), a popup will appear automatically when a suspicious link is detected by WhatsApp. WhatsApp has also released a new FAQ related to the Suspicious Links feature, which can be accessed here.

You can grab the free update using the following App Store link.