Next Gen iPhone Being Tested in San Francisco?

Oh snap. It looks like this could be the start of even more next generation iPhone rumors “in the wild”. MacRumors is reporting that the iPhone developer Pandav has seen evidence of an unreleased iPhone in their App’s analytics (within their app iBART). This is the same developer who reported iPhone 2,1 a year ago, which was confirmed by PinchMedia.

“PinchMedia who provides the analytics for the application breaks down customer usage including what specific devices are being used. This list of devices is reported to developers using internal device identification numbers assigned by Apple. In this case, “iPhone3,1” was first spotted in Pandav’s usage logs in November. This “iPhone3,1” identifier does not match up with any shipping iPhones. The last iPhone released to the public was the iPhone 3GS which carries the identification string “iPhone2,1″.”

What’s also interesting to note is that in October 2008, Apple also started testing iPhone 2,1 (iPhone 3GS) in the San Francisco Bay area, home of Cupertino. What might the next iPhone bring? Multicore processors? Maybe an “alooomineeeuuum” unibody design like the current MacBook Pros? Possibly a CDMA version of the iPhone? Let the fun begin as we countdown to the next iPhone to grace our hands in summer of 2010. 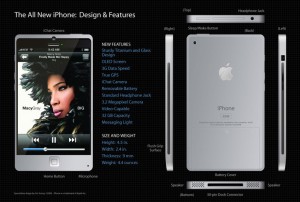