There has been speculation that a new iPhone is imminent and will be unleashed this summer during Apple’s 2009 WWDC. Whenever a new product is about to be released, rumors always float around the interwebs.

This weekend encapsulated a plethora of interesting new features that iPhone OS 3.0 will have and what new features the next gen iPhone 4G might include as well. Let’s review some of the rumors we heard about on the weekend!

– DigiTimes reports that OmniVision has received orders for 3.2MP CMOS sensors, which means the next iPhone camera could be much improved.
– iPhone OS 3.0 will enable 11 pages of apps, making for 180 apps max, versus the current 148 limit–more room means more fart apps to download! 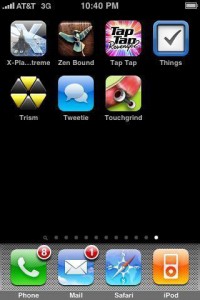 – AT&T is reportedly upgrading their 3G network frantically to make time for a faster iPhone coming this summer. AT&T upgraded their networks prior to the 3G launch, so this could mean something faster is coming our way. Maybe it coincides with the Rogers 4G network upgrade rumor we reported earlier.
– Another report states that two different iPhone models will be announced, with “high end” and “low end” models depending on where the iPhone is being sold.
– Could the next iPhone also take advantage of low-power consuming 802.11n WiFi?
– More 3.0 digging has revealed possible video editing tools!

I think most of the 3.0 features rumors have some legitimacy as there are thousands of iPhone developers currently have access to the 3.0 firmware beta. But when it comes to the other features of the next gen iPhone, Apple is known to keep a tight lid on next gen hardware upgrades.

Most of the time, the juiciest rumors with the most weight usually are “leaked” a couple days before major announcements, such as Apple Events. In this case, we could possibly expect some exciting news once the 2009 WWDC is kicked off come June 8-12.

We do know that Rogers and Fido have started to discontinue their iPhone 3G stock. This could very well be an indication that something big is yet to come.