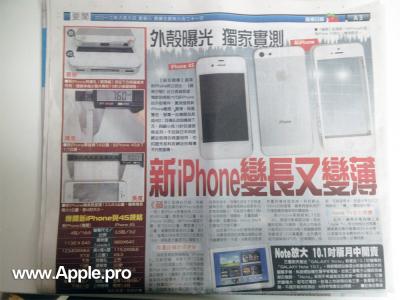 The measurements were taken by Chinese newspaper Apple Daily, who has allegedly obtained one of the leaked iPhones presented during these past few weeks.

Based off reports from case-makers in June, the Apple Daily report is spot on. I would’ve preferred more details, but past measurement reports pretty much verify this latest report:

Ranking up against the iPhone 4S, the next-generation iPhone is 1.7 mm thinner, that’s a 18 percent reduction in thickness. The height is also expected to receive an upgrade, estimated at 4.0 inches rather than 3.5 inches.

Sounds to me as if Tim Cook’s “doubling down” on security statement during the AllThingsD conference in May was simply a mere false statement. We are absolutely buried in next generation iPhone evidence at this point.

Are iPhones these days getting just too thin? I’l personally take battery life over a 1.7 mm size reduction.