Apple reports that the Worldwide Developers Confrence slated for early June will be hosted by “A team of Apple executives, led by Philip Schiller”, and that means that Steve Jobs will not return from his medical leave to kick off this much-anticipated event.

In their press release they also said they would be discussing the new Snow Leopard and iPhone 3.0 operating systems, without a whisper of any new iPhone technical upgrades. Of course, it just wouldn’t be Apple if they said anything, anyways. 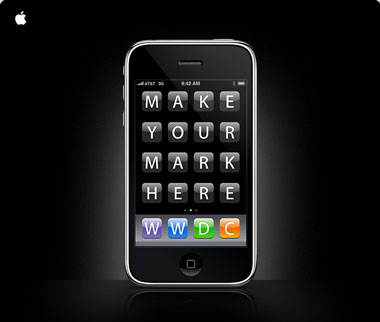 With this news, Piper Jaffray analyst Gene Munster told Apple Insider “While some investors may be expecting Apple to launch redesigned iPhones at WWDC, we do not anticipate the launch in early June.”

While the first set of iPhone AT&T contracts are set to expire, and the Palm Pre set to launch  soon (in the States, at least) it seems this would be a bad business choice to only upgrade the software for the iPhone and leave the people without an iPhone Upgrade option. But wait, there’s more from Munster, he believes that Apple is waiting out for Job’s return, which he suspects will be near the end of June, to host a special event to annouce not only the new, shiny upgraded iPhone, but a ‘Family’ of iPhone products. (The often rumoured iPhone Nano, anyone?).

So, I’ve been keeping my fingers crossed for months now for nothing, apparently. All my wishful thinking may be wasted. What do you think? Will they announce a new iPhone without Jobs at WWDC anyways? Or is there simply no new iPhone on the horizon?

In which case, am I the only one, or is anyone else thinking of switching to an Android Phone?
(j/k – or am I?)