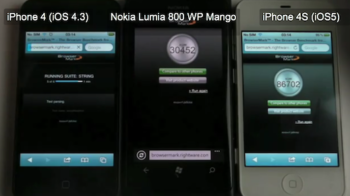 Is the Nokia Lumia 800 ready to turn the company around? This latest device from Nokia runs Windows Phone 7.5 (Mango) and was recently put to a browser showdown with the iPhone 4S (running iOS 5.0) and iPhone 4 (on iOS 4.3).

Here are the detailed scores–looks like Nokia and Microsoft still have some work to do with Mango to keep up with the iPhone 4S. It would’ve been interesting if the iPhone 4 was on iOS 5 as well:

Dear Nokia and Microsoft, please let us know when you plan to actually ‘disrupt mobile ecosystems’. Thanks.