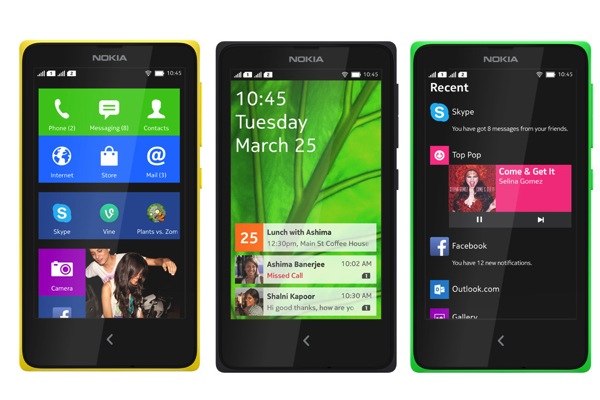 The rumours were true: before being acquired by Microsoft, Nokia has turned to Android to secure a place in the low-cost smartphone market, the company has announced. The Finnish company today launched the Nokia X, X+ and XL, priced between the existing Asha and Lumia €89 ($135), €99 ($150), and €109 ($166) respectively (via Reuters).

Nokia’s X-family of phones comes with high-quality design and a range of bright colours, and brand new tile-based Home screen that offer a simple way to manage the apps and phone functions.

Nokia Chief Executive Stephen Elop said the market had “shifted dramatically”, and the group needed to address a sub-$100 segment that is set to grow four times faster than more expensive phones. “We see the X family being complementary to (Windows Phone) Lumia at lower price points,” he said. “Even as you see Lumia push lower and lower, you will see us push lower with Nokia X below that.”

The Nokia X is the entry-level phone with 4-inch IPS LCD screen, 512 MB of RAM, and 3 MP camera. The X+ sports the same 4-inch screen, but also better tech specs: 768 MB RAM. A 4 GB MicroSD card is also included in the box. It comes in the same colours as the Nokia X: green, black, white, yellow, cyan, and red.

The Nokia XL is the “higher-end” device with its 5-inch screen, 786MB of RAM, free MicroSD card ,and 5MP rear camera, with autofocus and flash.

Product Marketing Vice President Jussi Nevanlinna told Reuters the number one requirement from customers was access to Android apps. “Our fans oftentimes tell us ‘We love your hardware, we love your products, but we also love our Android apps’,” he said. “Can you make something happen so the Android apps magically run here?'”

As the company CEO points out, the new devices address a market that is dominated by low-end Android smartphone shipments. Analysts, however, are skeptical about this move: the 180-degree move has come too late, even with its attractive price tag.