iFixit has completed its teardown of Samsung’s latest Galaxy Note 20 and Note 20 Ultra flagships and awarded them a disappointing 3 out of 10 for repairability. 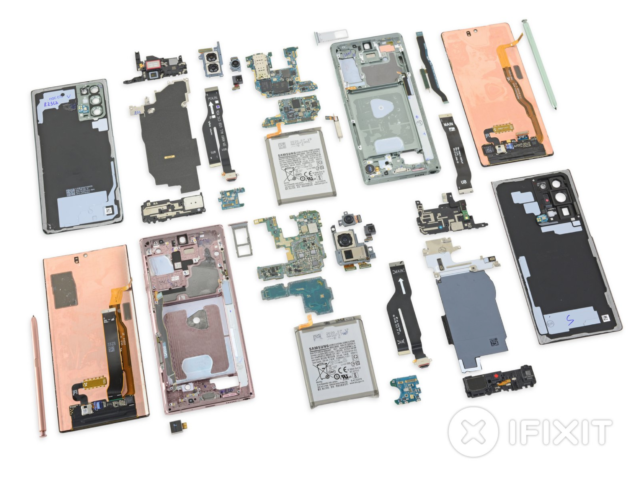 In addition to showing us how difficult it is to replace the components inside, the side-by-side teardown also highlights all the key differences between the two phones.

While both phones support 15W wireless charging, the iFixit teardown reveals the bigger Note 20 Ultra has a double-coil configuration, similar to the Galaxy S20 Ultra. There are a few other striking differences as well. Thanks to its more impressive 108MP main camera and periscope lens, the camera modules on the Note 20 Ultra take up a lot more space than the modules on the Note 20. Despite these differences, however, iFixit found the two phones to be equally challenging to repair.

The batteries inside the Galaxy Note 20 and Note 20 Ultra are glued in, which makes it quite tough to access them. In fact, nearly all major components inside have “tough adhesive.” That said, there are a few modular components as well, which can be replaced independently. Samsung is also using standard Philips screws, although a few of them in the midframe are said to be extremely tight.

Additionally, the teardown by iFixit‘s experts revealed a “multi-layered graphite thermal pad” instead of the expected copper heat pipes.

Now, this wouldn’t be so odd if it weren’t for at least one earlier teardown of the same device, which revealed copper heat pipes. It appears that Samsung is either testing out different cooling designs for the Note, or perhaps shipping slightly different Notes depending on the market.

In any case, there’s no reason to believe that the graphite thermal pad-based cooling is any worse (or better) than a vapor chamber design with heat pipes. It’s an interesting anomaly that we don’t often see on high-profiles phones such as the Samsung Galaxy Note 20 and Note 20 Ultra.