Now This is a Clever ‘Do Not Disturb’ Toggle Concept [VIDEO] 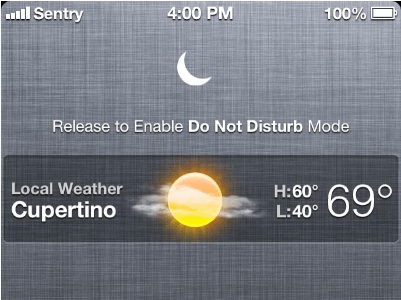 The developer of the beautiful app-switching jailbreak tweak Auxo has come up with an interesting and creative concept on how to toggle Apple’s Do Not Disturb mode (when it’s actually working that is).

Sentry originally released his concept on his Dribble page, but went to the Verge Forums to further explain how his toggle concept for iOS comes from OS X Mountain Lion:

At first, I looked at the Notification Center in OS X Mountain Lion (which allows you to enable and disable a DND-like function via an on/off switch) and came up with this. However, I found it to be unintuitive to have a two step process when the original point was to make enabling DND less of a hassle. Inspired by Do Not Disturb’s status bar animation that presents the moon in an eclipse fashion, I came up with this

The concept itself can be seen below:

Now this is brilliant. There are nice visuals as the moon animates into a crescent shape, which is the icon for Do Not Disturb, and when pulled down and released it’s toggled on. Is this something you’d like to see in iOS 7?