Numerous ‘iPhone 5’ Auctions Have Started to Appear on eBay

It appears creative entrepreneurs have attempted to profit off the upcoming ‘iPhone 5’ by posting unofficial pre-orders up for sale on eBay. There has been no indication of an ‘iPhone 5’ although numerous case leaks have us believing otherwise. One description states a 32GB iPhone 5 will be provided to the auction winner based on AT&T supplying the phone. One of the auctions has a priceless description:

…Because the iPhone 5 specifications are not yet known, I cannot tell you what they are. However, I will be getting you the 32GB model in 3G

There’s nothing better than placing bids on an unknown item. Given the iPhone is not available in certain countries, eBay is normally an avenue for enthusiasts to acquire their phones. Auctions have ended or are currently sitting at well over $1000USD.

We’ve seen previously an iPhone 4 prototype on eBay but these latest iPhone 5 auctions definitely take the cake. Apple is rumoured to announce new iPhones at a media event on October 4th.

Thanks for the email Elise! 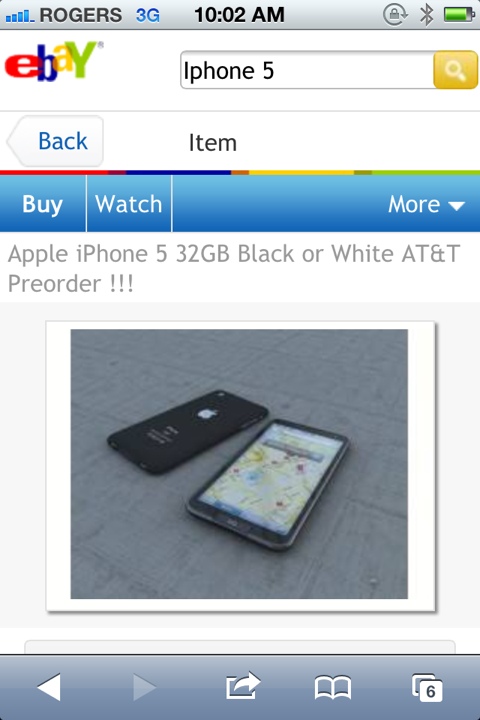 Apple reportedly wants an easy way for people to build augmented reality apps, that might even be assisted by the company’s Siri voice assistant, reports The Information. Unnamed sources say Apple plans to let Siri build an AR app when asked through its upcoming mixed-reality headset. These apps would then be able to submit to […]
Gary Ng
29 mins ago