When Apple unveiled the iPhone 5, most of us were expecting to see accessories like an iPhone 5 bumper or a dock with new Lightning connector. However, no such announcements were made that day and so far, Apple has not released any information regarding such accessories either. Despite that, some keen eyed readers have noticed that the official iPhone 5 user guide actually has references to an official “iPhone Dock” accessory which could be coming out soon (via Apple Insider).

As pointed out by the source, page 7 of the iPhone 5 user guide references to an “iPhone Dock” accessory (shown above) at the bottom of the page, under the “Connecting cable” heading.

Another mention of an officially titled “Dock” can be found on page 34 of the iPhone 5 owners’ manual.

In a section that informs users how they can recharge the battery on their new iPhone 5, the guide notes that users can connect their handset “to your computer using the included cable and the Dock, available separately.” 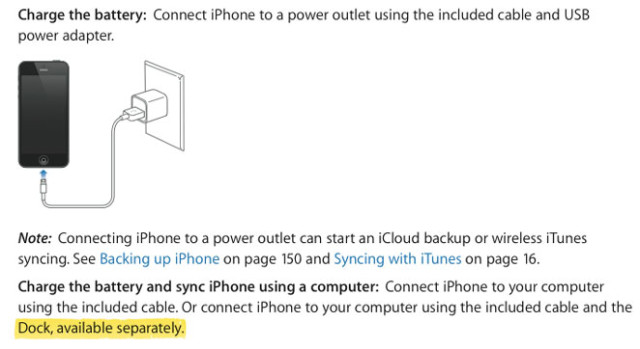 Previous reports have suggested that Apple may not be planning an official iPhone 5 dock but references contained in the official iPhone 5 user guide definitely suggest that the company could still release such an accessory. What do you think?