Remember when we announced that Apple was holding a contest to celebrate its 1 billionth iPhone app being downloaded from the App Store? Well, it turns out that the 1 billion mark is coming a few days early to readers of iPhoneinCanada.ca!

iClarified received a report from a MacMagazine.com.br reader that managed to “discover” the 1 billion App Celebration page! How did this happen?

…a counter embedded in the Apple home page which detects if your computer’s time and date is past the estimated time the billionth app is downloaded. Currently that estimated time is at 14:12.20 on April 23rd.

So it looks like at 2:12pm, on April 23 that is the exact time that the expected one billionth iPhone app will be downloaded. Pretty impressive considering the App Store has only been around for nine months!

Nonetheless, take a look at the celebration page below, and just cross your fingers that you might be the lucky person to win that spectacular grand prize!

I’m sure once Apple discovers this they will either change the graphic image, or just leave it alone. I just find it interesting that given Apple’s track record of keeping things below the radar, this was able to get “discovered”. I know it’s only an image from an upcoming webpage, but it’s always funny to see this stuff get leaked. 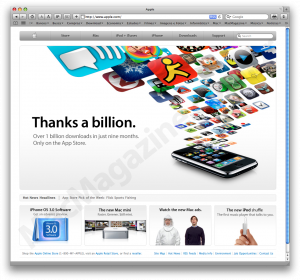 Just let me be the first to say congrats to the winner of the contest–early!