First it was Alberta approving ridesharing insurance for Uber, now Ontario has done the same, reports The Star.

The Financial Services Commission of Ontario (FSCO) announced yesterday it approved a policy from Intact insurance, for drivers transporting passengers in their private vehicles using Uber. The Commission said the new insurance addresses a “critical insurance gap” for the industry. 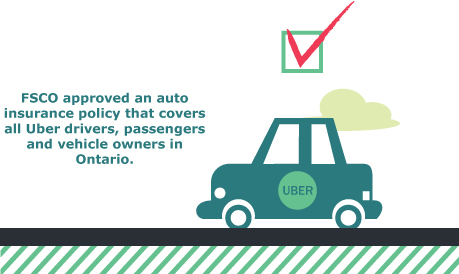 Uber Canada’s general manager, Ian Black, said in a statement “This new ride-sharing insurance approved by (the Financial Services Commission of Ontario) should serve as a practical solution designed for ride-sharing.”

Black added “Both (Intact) and Uber remain engaged with regulators across Canada to bring new ride-sharing insurance policies that offer a smart, seamless and simple solution for driver-partners.”

FSCO also announced it has approved electronic insurance cards, accessible within the Uber app, which drivers can use to show police, when they are driving for the company (this is pretty cool).

The Intact policy for Uber drivers includes statutory accident benefits, uninsured motorist coverage, third-party liability of up to $1 million while the app is running, and $2 million after a ride has been accepted.