Opera has announced an update to its mobile browser for iOS, bringing a new look and a new name. 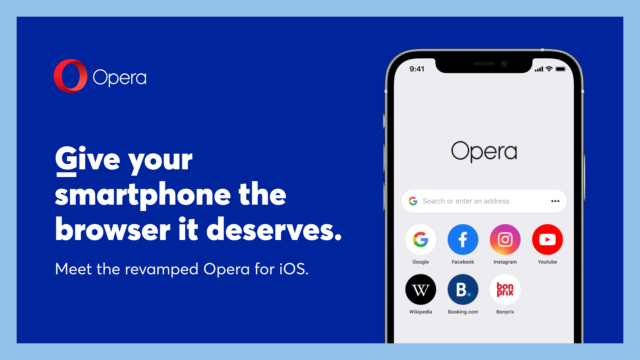 According to a new blog post, Opera has pushed out an update for its iOS browser, dropping the “Touch” in Opera Touch to become just plain old Opera on iOS.

The company stated that it has seen a massive jump in users last year, with iOS users from North America and Europe downloading the browser. Jona Bolin, the company’s product manager for Opera on iOS attributed the “tremendous interest” to Apple’s iOS 14 release, which allowed users to change the default browser on their device.

Featuring a new look on iOS, Opera introduces a modern UI, keeping its minimalist design and the powerful features that Apple users love. The redesign aims to reflect the browser’s lightweight foundations and minimalist approach, promising users a fast and secure browsing experience.

“The revamp of the user interface in Opera also unveils a neater and flatter design that gives the browser a more refined appearance than before,” reads the post. “The new-look replaces the diagonal background pattern, initially introduced into Opera Touch, with flat surfaces and removing shadows on bubbles and other elements.”

There are new icons for the bottom bar and fast action button, while shadows have been removed from bubbles and other elements. The diagonal background is going away to deliver a neater, flatter look, and colours have been updated throughout the app, which retains Opera’s long-held minimalist ethos.

Users can also connect their iOS devices to their desktop computer in seconds, with the Opera Flow feature. They can scan a QR code, which will let all of their bookmarks, links, notes, and other data sync between all their devices.

“We plan to keep adding additional UI changes in the upcoming months,” the post concludes. “These additions will improve usability and aesthetics to give our users a more enjoyable browsing experience on their beautiful iOS devices. This is something unique that no other browser available on the App Store currently offers.”