Opera Mini, the famous web browser for mobile devices, is perhaps the best browser offering by Opera till date. According to a recent publication by TNW, the company has announced an 83% increase in Opera Mini usage over the past year hitting the 140 million users mark in October 2011. The report also claims that 22 countries now have at least 1 million users actively using the browser every month. Since its launch in 2006, Opera Mini has doubled its userbase a total of 8 times. 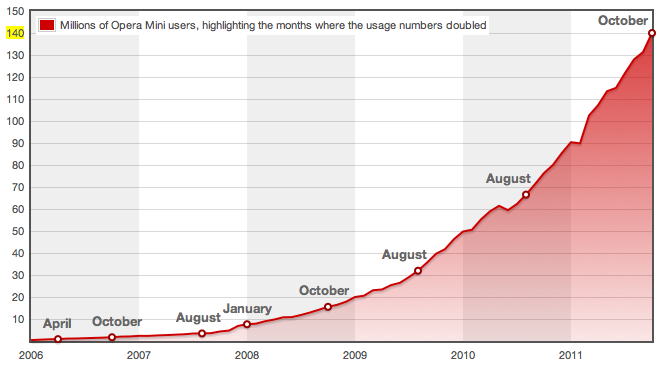 In April, Opera announced that its Mini browser had reached 100 million monthly users and two billion daily pageviews – making it the world’s most popular mobile browser. The free browser, which supports 96 languages and huge range of different smartphone and feature-phones including Android, Symbian/S60, BlackBerry and iPhone, reached the milestone in its own right, two months after the Opera Software announced the same figure for its Mini and Mobile browser releases combined.

Do you use Opera Mini on your iOS devices or is Safari still the browser of choice? Let us know!

Apple’s Stage Manager multitasking feature in iPadOS 16 is only for tablets with the company’s M1 chip, but that is now changing. According to Engadget, Apple told the publication Stage Manager is now expanding to older iPad Pro 3rd gen and 4th gen models when iPadOS 16 is released later this year. M1 iPad Pro […]
Gary Ng
36 mins ago