Turns out Apple’s competition (and suppliers) is low on creativity when it comes to marketing campaigns, as it is much easier to poke fun at Apple than to come up with something original. It started with Samsung, and now LG has joined the line with its new ad posters pushing its handsets. 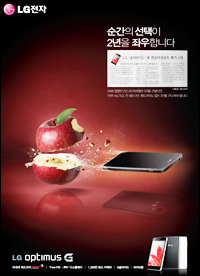 The Korea Times reports that LG Electronics has released a newspaper ad in all major local media on Monday that has its Optimus G smartphone slice through a half-eaten apple. The accompanying slogan says: “A moment’s choice will decide your next two years,” encouraging consumers to buy LG products over the Apple’s.

But LG doesn’t stop here — despite Apple being its biggest client — while announcing the recent 10 million sales of its L-series handsets, LG mobile chief Park Jong-seok said that “whereas other manufacturers are putting all their eggs into a one-size-fits-all basket for their phone, our strategy is to develop mobile products for all types of customers according to their individual needs and lifestyles.” He, of course, is referring to Apple.

And there is more: Posters on the majority of stores affiliated or owned by the LG Group’s mobile carrier arm LG Uplus smash the iPhone with their posters, containing phrases such as “iPhone 5? Really disappointing!” or “iPhone 5? It will stifle you the more you use it!”, while other variants make fun of it.

They call the 4-inch screen “too small,” its download speed “80 percent of its competitors,” and “a phone that isolates a consumer by having no up-to-date apps available.” They note the absence of near field communication (NFC) and digital media broadcasting (DMB).

LG, on the other hand, denies any intended attacks on Apple:

“Our posters contain facts on the iPhone 5, and is not slander. It is just a fact that is has no NFC, no DMB. Its screen is comparatively small so that is also true. Other nuanced phrases are usually adopted for marketing. We are absolutely not targeting Apple as a company and the messages on the posters are not our official stance,” said LG Uplus spokesman Kim Sang-pyo.

“The ad was prepared to show the capabilities and true value of the Optimus G, which was chosen as the best smartphone both locally and globally. We wanted to highlight the fact that consumers must carefully scrutinize products on whether they have must-have features,” said LG Electronics spokeswoman Jinny Lee.

I think it’s time for LG to reshuffle its marketing team.