Call it bullshit reporting or a publicity stunt, but according to security firm GFI, Apple’s Mac OS X is the most vulnerable operating system of 2014, with the iOS platform coming in second. And it doesn’t stop here. The report goes on to claim that Microsoft’s operating systems, especially the now defunct Windows RT platform, are the most secure of them all. Wow, seriously? 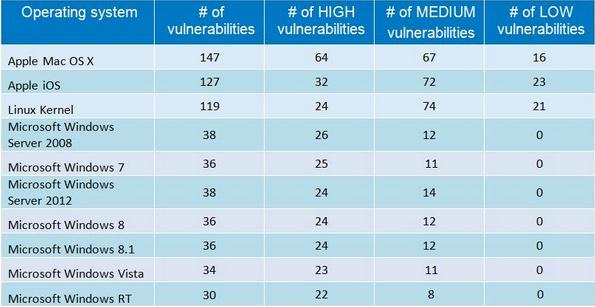 As pointed out by iMore’s Rene Ritchie, the shoddy report has so many problems that “it’s hard to figure out where to begin”. For instance, the report lists OS X and iOS as single line items on the chart yet Windows is broken down by version. “Why wouldn’t all operating systems be listed the same way?”, notes Rene. Here are some other blunders made by GFI in its report:

How this dumb report got approved for publishing in the first place beats me, but what’s more astonishing is, why mainstream outlets even bothered picking it up?