Apple unveiled Mac OS X 10.10 Yosemite a little more than a month ago at this year’s WWDC. The operating system includes a long list of new features, such as tighter integration with iOS as well as interface tweaks. The first beta of Yosemite was made available for download to developers the same day, and since it has been opened up to limited public testing, adoption of the forthcoming operating system has noticeably grown compared to other available versions.

After noticing a spike in web traffic of Mac computers running Yosemite, Chitika Insights decided to take a closer look at the phenomenon and analyzed online ad impressions between June 2 and July 2. 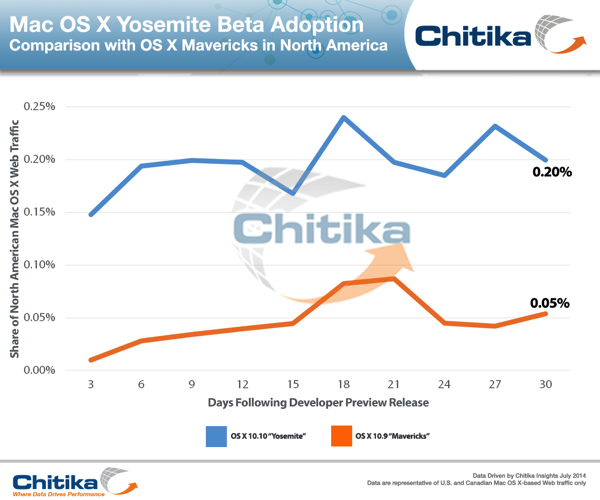 What they found is the following:

In the three days following the release of the first OS X Yosemite Developer Preview, adoption jumped significantly – hitting 0.15% of total U.S. and Canadian Mac OS X Web traffic. That figure is particularly impressive considering that adoption of the OS X Mavericks Developer Preview achieved only a 0.05% share after 30 days. The increased level of aggregate activity for Yosemite is likely partially driven by the prominent changes present in this OS version fueling a higher degree of developer curiosity and experimentation. The changes to Safari in particular may be prompting a greater amount of Web usage from current users in terms of testing and customization. 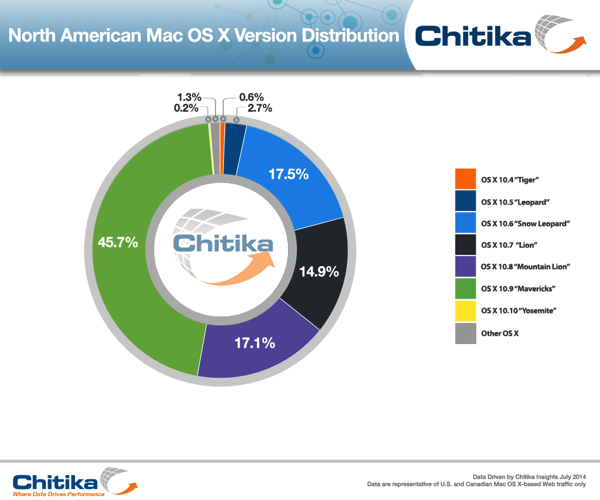 Mavericks’ market share has grown to 45.7%, up 6% compared to March, while Lion’s and Mountain Lion’s market share dropped during the same period. It’s worth noting, though, that the nine-year-old Tiger is still generating more traffic than the beta version of Yosemite. Considering the rapid adoption rate of the beta version, however, we can certainly expect a similar performance for the official version as well.